A sick kid, a vulture, and an affair round out Episode 2 of TNT’s new medical drama Monday Mornings. 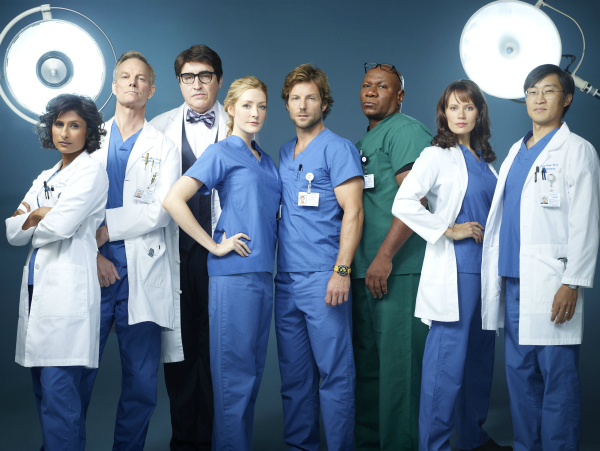 There are three things medical dramas do best: Make you cry over sick kids, hate transplant doctors, and condone extramarital affairs. It’s only Episode 2 and Monday Mornings is on its way to accomplishing all three.

They pulled the sick kid card

Let’s start with the sick 13-year-old, Tricia, who only has a few months left to live unless she has brain surgery. Unfortunately, the surgery isn’t 100 percent safe and she might not survive it. But like Dr. Sung Park (Keong Sim) says, “don’t do, dead.” Tricia, however is not persuaded by his incredible bedside manner and has decided to live out her last few months by going to the Valentine’s Day dance, finishing the opera she’s writing, and hanging out with her family.

Although she makes a good argument about wanting to really live while she’s alive instead of being confined to a hospital bed, Dr. Hooten (Alfred Molina) and Dr. Villanueva (Ving Rhames) get involved and try to convince her that surgery is the best move. And I have to tell you, even in scrubs Ving Rhames looks like a BAMF. I swear he even threateningly cracked his knuckles at one point. It’s no surprise she caved in and underwent the dangerous surgery.

Through epic music and inserts of Dr. Hooten playing the piano, Tricia’s life hangs in the balance. Luckily, she comes through without any complications and everyone cries just a little.

A vulture in the hospital

Then there’s this jerk transplant doctor, Buck Tierney (Bill Irwin). He is insensitive, no one likes him, and even Dr. Hooten calls him a predator, a vulture scouring the hospital looking for organs to steal. However unlikable this guy is, he’s in the business of saving lives and he’s damn good at it.

There was a gang member who was shot and his head was literally half missing. Dr. Tierney jumped the gun and declared him brain dead only to later find out he was still alive and functioning. That was the thing that got him in trouble this week. He couldn’t even wait for a person before he tried taking his organs. But, when the patient finally did pass away, Dr. Tierney saved the lives of six people. Some heroes are harder to recognize.

And let’s not forget about the juicy affair. Dr. Ridgeway (Jennifer Finnigan) is married, but her husband sounds like a jerk. He calls her an umbrella because she blocks out the sun. With mean little quips like that it’s easier to approve of the side thing she has going on with the handsome Dr. Wilson (Jamie Bamber).

I’ll buy it because they are selling it to me, but it’s an easy plot line that won’t work out in anyone’s favor. We know this, but still we watch and dream that they’ll live happily ever after.