From torture to threesomes, this week’s episode just proves that Carroll’s followers have some deeply rooted emotional issues. 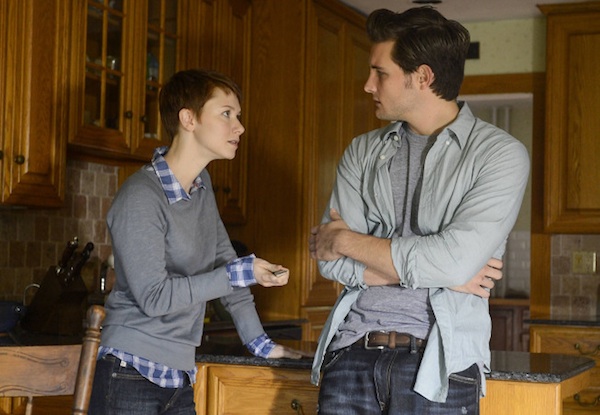 There’s been a lot of tension between Emma (Valorie Curry), Jacob (Nico Tortorella) and Paul (Adan Canto) recently and it was easy to assume it was because Paul was in love with Jacob and jealous of Emma. Who knows, that might still be true, but the real reason is far more scandalous.

It turns out that our wannabe serial killer, Jacob, has never killed anyone! He’s been lying to Emma all these years and she is seriously upset about it. Just to clarify, she wasn’t upset that he had an affair with a man, she was upset he hadn’t murdered anyone.

To fix this devastating problem, she commands Jacob to kill Paul’s pet, Megan, that’s tied up in the basement. But he just can’t go through with it and instead lets Megan go. Of course, Emma and Paul capture her, stab her, and then lock her back up in the basement.

And then this is when things get weird (note the sarcastic italics). Jacob catches Emma and Paul taking a shower together and they open their arms to him in a welcoming embrace. The trifecta is complete.

This week, Maggie is still on the loose and mourning the death of her husband, Rick. She’s out for Hardy’s blood, but she’ll settle for his sister’s. Jenny and Hardy are extremely close as their lives could rival any Greek tragedy. Think dead hero cop father, dead mother, dead fireman brother… on Sept. 11. Doesn’t get much worse than that, until your sister is kidnapped by psychopath. This family may be cursed.

Apparently, Maggie was a serial killer long before Carroll got a hold of her, so she’s really had time to master her skill. When Hardy arrives to rescue his sister, she tortures him with electrical currents that overload his pacemaker (his Achilles’ heel) while making Jenny watch. Creative and cruel, no wonder Carroll admires her so.

Just when it looks like Hardy won’t last another heart-stopping moment his sidekick/baby-sitter, Mike, arrives and saves the day.

There are still a few little glances and comments that seem to hint that Debra may be a follower or fan of Carroll’s in some way, but there’s no telling for sure. Also, this Claire (Natalie Zea) and Hardy sexual tension thing is going to go on forever. No progress was made this week. In fact they may have taken a step backward when Hardy declined to stay for breakfast. Stupid boys, am I right?