The Walking Dead‘s premiere was a smashing success. Even the Grammys couldn’t keep viewers away. The zombie series is back with a record-breaking bang. 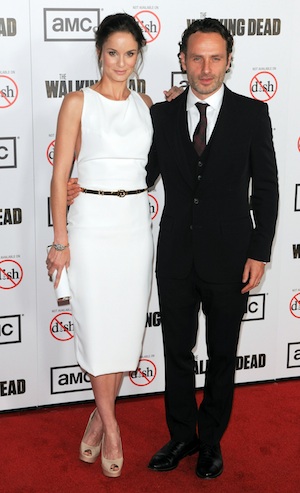 Sunday night, The Walking Dead returned with its midseason premiere. The AMC series is the highest-rated drama on the network’s roster. Mad Men and Breaking Bad may get awards, but The Walking Dead is the people’s choice.

What’s ahead for Walking Dead? >>

According to EW, its latest outing pulled in 12.3 million viewers and a 6.1 rating in the ages 18–49 demographic. It had the highest demo rating for any basic cable series. Not only that, but on average, it beats broadcast juggernauts like The Big Bang Theory, Modern Family and NCIS.

If a show scores a 3.0, it’s considered decent. The Walking Dead doubled that number. Charlie Collier, AMC’s president, released a statement regarding the show’s latest triumph:

“When you look at numbers like this, the first thing that comes to mind is how grateful we are to the fans of this show. They embrace The Walking Dead in a way that we wanted to believe was possible but we never take for granted. The cast and crew put everything they have into making this show. They’re a phenomenally talented group who truly give their all. We congratulate everyone involved.”

Overall, The Walking Dead delivered 16.6 million viewers thanks to repeats. The episode “The Suicide King” picked up immediately where the finale left off. Both Rick and The Governor sank further into madness, while their respective clans are in disarray.

The Walking Dead airs Sundays at 9/8c on AMC.

Did you watch The Walking Dead’s premiere?