Angelina Jolie returned to the spotlight on Sunday night at the American Society of Cinematographers Awards in Los Angeles. She had been away from the red carpet for nearly a year. 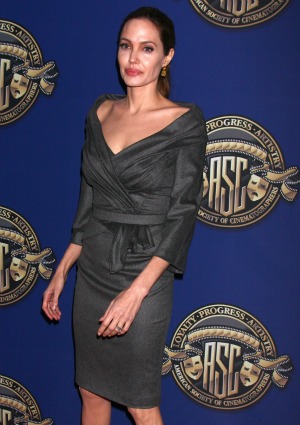 Guess who’s back on the red carpet? After nearly a year away, Angelina Jolie made a pretty subdued appearance at the American Society of Cinematographers’ (ASC) Outstanding Achievement Awards on Sunday night.

The mother of six was last on the red carpet in March 2012. However, it was her grand appearance at the 84th Annual Academy Awards where she showcased her long, lean right leg in a black Versace gown that is most remembered by the public. That leg became more famous than some of the Oscar winners last year.

At the ASC awards on Sunday, Jolie was dressed in a pretty — but conservative — long-sleeved gray dress by Atelier Versace that highlighted her svelte figure. With simple earrings to accessorize the outfit, the only other piece of jewelry she donned was the 16-carat diamond ring from her fiancé, Brad Pitt.

The 37-year-old was at the Hollywood event to present the Lifetime Achievement Award to Dean Semler. He was the director of photography on her film In the Land of Blood and Honey, which was her directorial debut.

Now that Angie is back, here’s the big question everyone is asking: When is the big day? Since the engagement happened almost a year ago, there have been false rumors about wedding dates, but it seems like the Jolie-Pitt kids are the ones who are the most anxious.

Pitt told People in November, “I am getting more pressure from my kids, and it is something I want to do within their lifetime, but I also feel like the time has come. The time is nigh. It’s soon. I got a good feeling about it. We’ve had a family, we’ve raised the kids. I am surprised how much [marriage] meant to me once you had that.”

We will see if the Jolie-Pitt wedding actually happens in 2013, but at least it’s nice to see Angie glamming it up on the red carpet again.