Don Diamont of The Bold and the Beautiful talks about his scheming character, Heather Tom and the romantic gifts waiting for his wife on Valentine’s Day. 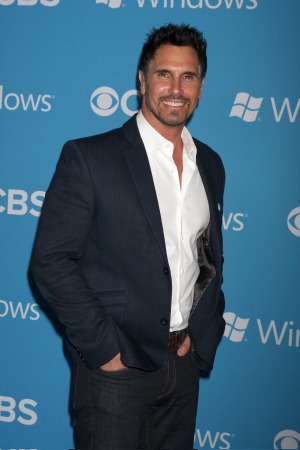 In 2011, the media was ready to write off soaps as a television genre that had lost its luster. Just two years later, ratings are up, fan support is stronger than ever and SheKnows had the opportunity to talk with Don Diamont from The Bold and the Beautiful about the power behind the daytime show.

Diamont has a long history in the soap world: His first big break came from a recurring role on Days of Our Lives back in 1984. The following year, he began a long contract with The Young and the Restless as Brad Carlton from 1985 until 2009, only taking a two-year break in the mid ’90s to pursue other projects.

After budget cuts forced his departure from Y&R, the soap hunk almost immediately found himself with a new contract, a new devious character and a new show in The Bold and the Beautiful, where he remains to this day.

According to a late January press release from CBS, The Bold and the Beautiful is “the most-watched dramatic serial in the world.” With the recent two-year pickup for the show and viewership up 6 percent over last season, Diamont tells SheKnows, “Clearly the network is liking what they’re seeing.”

On the fan side, he said, “People are loyal to [soaps] and [they] tune in to be entertained by scripted material and not just another talk show or cooking show.”

He looks fondly back on his time at Y&R as Brad Carlton, where the cast “really did become an extension of my family… and it was always a joy to go to work.” However, it was clear when creator Bill Bell retired, Diamont says, “there was a bit of a different feel over there for me… but I was very blessed to have that.”

When the actor moved over to The Bold and the Beautiful, he relished his new role of Bill Spencer Jr. because it was written specifically for him. The challenges with a devilish role like Bill Spencer are to “make him multi-dimensional, not just a mustache-twirler.”

His role also allows him to work with some of the hottest ladies in daytime television, including the beloved Heather Tom as Katie Logan, who he describes as “just the best. She’s always in good spirits.”

In fact, he is amazed at her acting prowess because Tom “can be laughing and joking one second, and the next second we’re shooting, she’s a puddle.”

Such skills are necessary in the daytime serial world: Diamont shared with us that on a heavy day of shooting, he has up to 60 pages of dialogue to tackle. However, he always seems up to the task.

In fact, his predictions for his character this year are deliciously spicy in nature. Diamont says that Bill Spencer Jr. “will continue to be the straw that stirs the drink.”

Outside of the acting world, Diamont is a newlywed after marrying his longtime love, Cindy, in June of 2012. When SheKnows asked if he had big plans for his wife on Valentine’s Day, he exclaimed enthusiastically, “Oh yes, I do! I always do and this year’s no exception. We’ll be having a couple’s massage in the afternoon and we’ll be having a dinner at a really romantic restaurant plus a few surprise gifts like candles and lingerie of a certain nature…”

It sounds like his wife is one lucky gal.