It’s hard to know which of her many (many!) ex-boyfriends Taylor Swift had in mind when she performed “We Are Never Ever Getting Back Together” at the Grammys — but a flash of a British accent made many think Styles was her target. 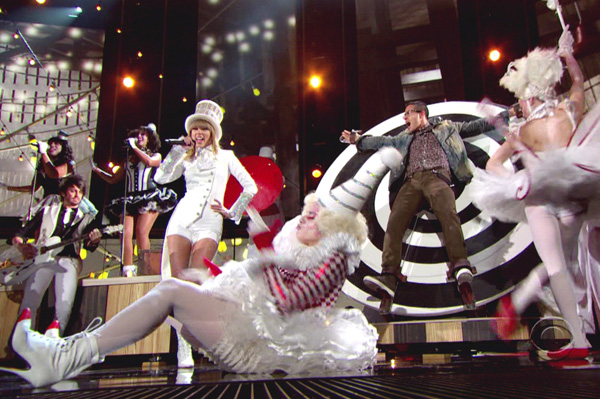 Is Taylor Swift not really over Harry Styles?

The “You Belong to Me” singer made waves Sunday night at the Grammy Awards with her opening performance, which featured an Alice in Wonderland/circus theme, Swift in tight white short-shorts, and a “did I just hear that?” British accent that some think was aimed right at Swift’s One Direction ex (who is English).

During the “talking” pause in Swift’s song, when the singer mockingly quotes an ex as saying, “I still love you,” viewers detected a British tone in Swift’s delivery, leading many to think this was a subtle dig at Styles.

“Did Taylor swift just do an English accent ?” tweeted director Judd Apatow, while E! Online tweeted, “Did we detect a Harry Styles-esque British accent during Taylor Swift’s ‘We are Never Ever Getting Back Together’ monologue?”

Swift and Styles were an item for a brief time this winter, but reportedly broke up after a holiday trip to the Virgin Islands went sour in January.

Did the Grammys just start a Katy Perry/Taylor Swift catfight? >>

Of course, Swift’s “We Are Never Ever Getting Back Together” was released in August of 2012, long before reports surfaced that Styles and Swift were seeing each other. Thus, it’s exceedingly unlikely that the song was actually written about him; there has been speculation that the song was about exes such as Taylor Lautner, Jake Gyllenhaal or Joe Jonas.

During the Grammys performance, Swift strapped a man to a giant target as if she were going to fling knives at him, circus-performer style.

Some have speculated that the man resembled Styles; both have thick, dark hair, and Styles is sometimes photographed in black-framed glasses that resemble those worn by the onstage target-man.