When a relationship is in trouble steps need to be taken to fix it. Sometimes that means making a deeper commitment, ending a romantic relationship or putting a bullet in someone’s chest. 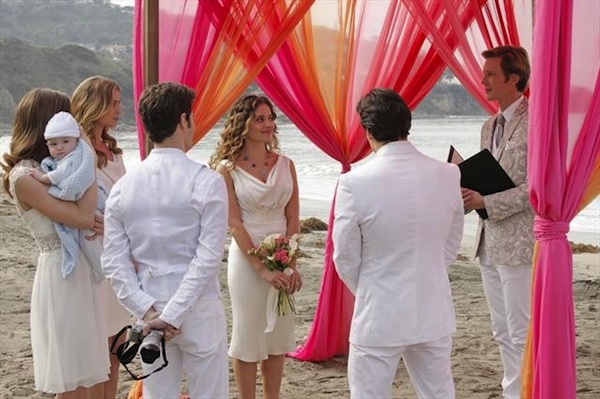 This week Revenge was all about evolving relationships in the Hamptons. One had to end to keep people safe, another had to finally take a leap of faith, while another felt murder would be the best way to solve the problems they’ve been having.

Amanda (Margarita Levieva) and Jack (Nick Wechsler) finally took that next step and said their “I do’s” in a beautiful beach wedding. Jack recited his vows as if he were speaking to the same Amanda Clarke he grew up with while Emily (Emily VanCamp) cried in the corner. She’s given up a lot in life to devote herself to destroying the Graysons, and Jack seems to be one of her biggest regrets. Amanda, however, seems to have no problem with him actually being in love with someone else.

Victoria gets her hands on paperwork that proves to Daniel (Joshua Bowman) how Helen Crowley is involved in the Initiative and how they want to use him for their own terrorist-like endeavors. He finally realizes that his involvement with Helen is bad for everyone around him, especially Emily, so he calls her and says there’s no time right now rekindle their relationship. He obviously still cares for her, but now she’s left trying to figure out another way to accomplish her plan.

Aiden received some horrible news when he found out his sister died and has been dead for a while. The Initiative was only using him to do their dirty work. He was about to walk away from Emily altogether after that, but he had a change of heart. He comes back for her and tells her that she won’t be alone anymore. It was really touching and sweet.

Victoria (Madeleine Stowe) and Helen have never had a good relationship. Two monsters never do seem to get along very well. But when Helen shows up at the Grayson’s and threatens to kill Daniel if Victoria doesn’t give her what she wants, Victoria decides she’s had enough of her. She takes out a gun and hits Helen with a bullet to the chest. Now, Helen’s body is lying in the middle of the floor and the Graysons need to figure out how to clean up their mess… again.