The pope shocked the world on Monday by announcing he would be stepping down at the end of the month. Pope Benedict XVI was the first pope in history to attempt to use social media to reach out to a new audience. 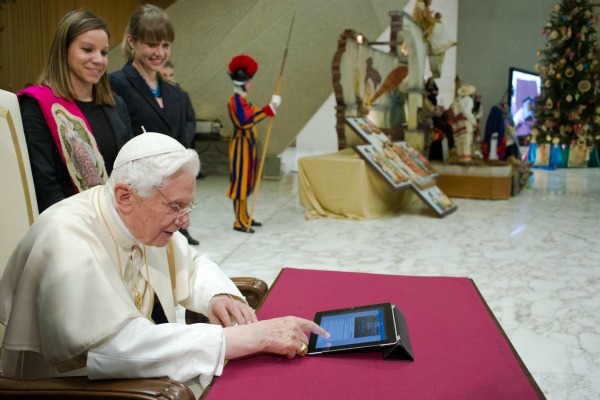 “Dear friends, I am pleased to get in touch with you through Twitter. Thank you for your generous response. I bless all of you from my heart.”

That message was the first tweet sent by Pope Benedict XVI less than two months ago, on Dec. 12, 2012, under the name @Pontifex. The pope has sent 34 tweets in the past two months, but Monday morning the world woke up to the news that Benedict would be the first pope to resign in nearly 600 years.

How to balance social media and the workplace >>

People quickly took to Twitter to share their thoughts. The hashtag #AskPontifex was used, and people shared their thoughts on Pope Benedict and his retirement.

Lauren Hartz, or ?@HartzAfterHis, tweeted, “@pontifex I may not be Catholic but I deeply respect and admire that the Pope joined Twitter so he could reach a new generation #askpontifex.”

But most people who used the hashtag did so only as a joke.

Al Kennedy, or ?@housetoastonish, asked, “Can I have your stapler and holepunch? #askpontifex”

The pope has used the hashtag to answer questions by his followers since he joined Twitter. Back in December, a mom from Portugal tweeted to Benedict.

“Any suggestions on how to be more prayerful when we are so busy with the demands of work, families and the world?” the woman tweeted, according to USA Today.

The pope replied to her, “Offer everything you do to the Lord, ask his help in all the circumstances of daily life and remember that he is always beside you.”

Pope Benedict XVI was attempting to reach a new audience with the Twitter page, and as of Feb. 11, he has more than 1.5 million followers. The reason for his retirement is still somewhat of a mystery, but the pope’s statement explained some of it.

“After having repeatedly examined my conscience before God, I have come to the certainty that my strengths, due to an advanced age, are no longer suited to an adequate exercise of the Petrine ministry,” the pope said. “In today’s world, subject to so many rapid changes and shaken by questions of deep relevance for the life of faith, in order to govern the bark of Saint Peter and proclaim the Gospel, both strength of mind and body are necessary, strength which in the last few months, has deteriorated in me to the extent that I have had to recognise my incapacity to adequately fulfill the ministry entrusted to me.”

The pope plans to be out of his position by Feb. 28.