The Walking Dead is back and we finally get answers to the questions that have plagued us for months! It’s even better than fans hoped for. 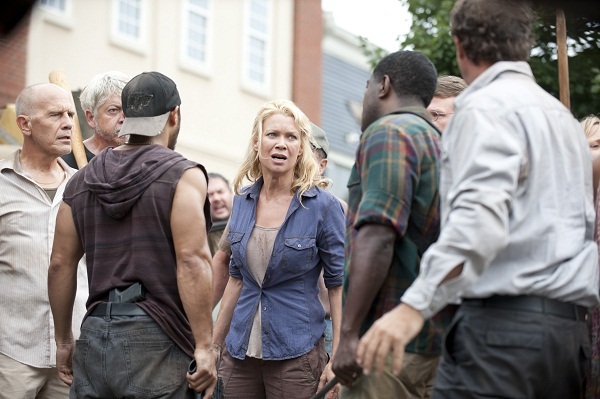 The Walking Dead left us with an intense cliff-hanger for their winter finale when the Governor left Daryl (Norman Reedus) and Merle (Michael Rooker) to battle to the death! I know you’ve lain awake many a night wondering how Daryl was going to get himself out of it, would Merle really turn against his brother and will Andrea (Laurie Holden) finally see the Governor for the one-eyed comic-book villain he is? Well, the show is finally back and here’s how it all worked out.

There was no way Merle, as pure evil as he can be at times, was ever going to turn his back on Daryl and kill him. Instead, with the help of Rick (Andrew Lincoln) and the group, the Dixon brothers are able to fight their way out of the city to freedom. Along the way, they set loose a few zombies and kill a few of the Governor’s men.

Once they’ve reached safety, Rick tells Daryl that Merle can’t come back to the prison with them. That’s no surprise since Rick is always saying no. But this time he didn’t buckle under the pressure of puppy-dog faces, so Daryl decided to leave the group and stay with his brother. He wasn’t even mad at Rick, he just had to do what he thought was right (even though we all know Merle isn’t worth that kind of sacrifice).

What is it going to take for Andrea to open her eyes and see that her moody, self-righteous, zombie-hoarding boyfriend is a dictator who kills innocent people? A cult leader might even be a better name for him. I thought she would finally draw the line when the Governor tossed her own friend to the zombies and watched him battle his way out for sport, but no such luck.

Instead, he manipulates her again by telling her another lie about why her friends were there and that they were bad for the city. She not only buys it, but later gives a speech to the town’s people about how wonderful Woodbury and the Governor are. That’s annoying.

Rick is absolutely losing his mind. When asked by the latest wanderers if they can stay at the prison, Rick winds up seeing the ghost of Laurie and starts to yell at everyone. He pulls out a gun, pacing and waving it around, yelling at the ghost. He may need to be removed from power quickly.

Also, Maggie (Lauren Cohan) and Glenn (Steven Yeun) are having a rough time and not really speaking to each other. After what went down at Woodbury, that makes sense, but it’s sad to see because normally they’re the only happy people around.

And finally, Beth (Emily Kinney) gave Rick this awkward kiss on the cheek. I think she may be fighting for Laurie’s old position as the woman by Rick’s side. I don’t know if a massive age difference matters in the zombie apocalypse, but I wouldn’t be surprised if Hershel beat Rick with his crutch if Rick ever touched her.