Not only does Justin Bieber think he’s more important than the Grammy Awards, he also thinks you want him. 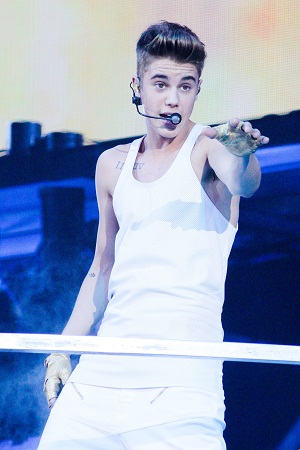 What do you do when you’re a world-renowned pop star and you aren’t nominated for any Grammys? The obvious answer is you that you go to the awards show and then pull a Kanye on your least favorite performer. If you’re Justin Bieber, though, you have a different approach.

In the most defiant act of a singer since… nearly all of the scandalous dresses at the Grammys, Bieber thought he could compete with the biggest awards show of the season by holding a livestream event.

His plan: To answer fan questions and release a new song. It had all the makings of a successful publicity stunt.

Except even the internet was tired of Bieber. His attention-seeking ways were stifled by way of a site crash. Too many tweens tried to tune in and the video reached capacity. We’re totally bummed.

Luckily for us, instead of waiting around to spend an hour with the world’s scrawniest Canadian gangster, we chose to watch the Grammy spectacle. We regret nothing.

As for the failed live chat opportunity, Bieber shared a topless picture of himself on Instagram sulking and saying he’d “never been so frustrated.” He then went on to tweet, “its not finished but heres a little part a song I’m working on” and shared a video of his new song, “You want me.”

As much as it kills us to admit it, we don’t hate it. Then, again, it’s so reminiscent of absolutely everything that Justin Timberlake has ever done, how can we not? Listen…

What do you think? When this hits the airwaves, will you be singing along or changing the station?

The return of indie at the Grammy Awards
Vindicated: Grammy surprises that weren’t so surprising
Country stars take over the Grammy stage