In this episode, there is lots of sulking from Edith, an interesting 15 seconds in a jazz club, and Tom is gonna make it after all. 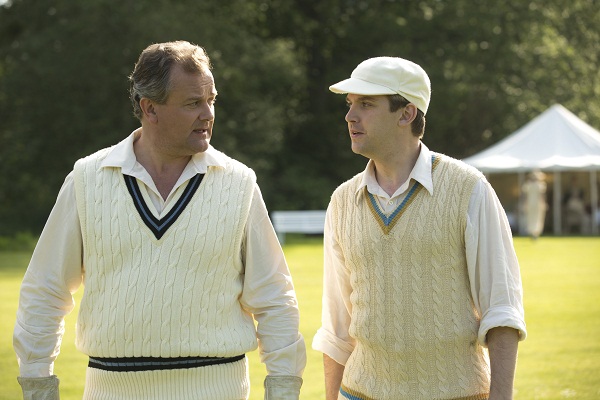 Where to begin this time, Downton-ers? How about with Edith… maybe it’ll shut her up if someone mentions her first.

Edith is still being pursued by the editor in London. By “pursued” I mean he wants her to write for his paper. I also mean he wants to date her. When E digs into his past (by calling 411?), she finds out something super scandalous, though. Her editor is married. Of course, when she confronts him, he tells her his marriage is straight out of a Bronte novel and that his wife is crazy and locked up in an institute. Do you think that will be enough for her to let him under her fringe? Only time will tell!

Edith also had another exiting experience. She and Matthew went on an adventure to a nightclub to kidnap her cousin Rose and return her home. Everything that happens at the club is amazing. Edith and Matthew are so out of place. And yet Matthew decides he wants to dance so as to talk Rose into coming home. It’s so fun to see him rocking back and forth stiffly on the dance floor! He also takes home the prize for best line of the night with, “I’m on the side of the downtrodden.”

Speaking of the downtrodden, poor Tom just hasn’t been able to catch a break from his life… nor his father-in-law. This time, though, Grantham finally loosens up (and is overrun by the ladies). When Matthew’s big plans for the estate leave Jarvis feeling outdated and annoyed and subsequently quitting, the Granthams are in need of someone new to oversee the tending of the land.

The ladies of the house (and Matthew) convince Lord Grantham to give the job to Tom as a way to keep him (and baby Sybil) close to Downton. It makes perfect sense anyway. Tom has quite a bit of knowledge about farming. Then, to make his day even better, Grantham asks him to join their cricket team. He has no idea how to play, however. Luckily, he still has Matthew on his side and he teaches him a few things. In the end, Tom scores the winning… home run/bat/swing/hit-thing. (Seriously. Someone (cute, single and male) explain cricket to me.)

Finally, Matthew and Mary receive good news, too. The doctor tells Mary all she needs is a minor operation and they’ll soon be able to have a “little prince.” Matthew seems far more excited than Mary, though, and we’re curious to see what happens to his plans for an heir.