The sexy actress from The Client List takes marketing into her own hands with her sizzling and provocative performance in this music video. 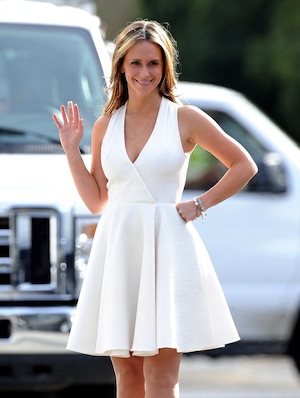 All of us ? or perhaps just myself ? were curious to see a release from Jennifer Love Hewitt. Her musical career didn’t exactly take off. I’m not sure exactly why, given she’s gorgeous and it doesn’t take overwhelming amounts of vocal talent to really make it in the industry (for example, most Disney stars and most pop stars).

In Jennifer Love Hewitt’s latest release, “I’m a Woman,” which I can think of no other reason being than to promote her hit show (which returns March 10), The Client List, she takes it all off and garners attention for a lot more than the show.

Hey, it is Valentine’s week — if you aren’t getting hot and heavy with someone, this video will surely get your screen foggy with all its steam.

Women are powerful. Their minds, their ability to multi-task several different roles ? and well, they’re made very physically appealing.

Maybe the video isn’t seeking a deeper meaning, but even though I wanted to attack her for setting us all back a few decades with using her sexuality to get attention, I have to admit, she could be making an even greater point. What’s that, you ask? That women don’t need to dress like men to be taken seriously. That women can cook, clean, be homemakers and dress sexy and still be powerful. Now, before I get attacked for saying that, I do think that the type of attention you get won’t be for your brain. But her performance, albeit a little sleazy, is also very “I am woman, hear me roar.”

She has been criticized in the past for having a heavy lower body, but I’m actually happy to see her flaunt it. Real women have curves, right?

What do you think, readers? Did she help or harm womankind?

I wonder what a Mr. Levine is thinking right now…

I remember a little birdie ? well, actually Jennifer Love Hewitt herself ? making a very overt pass at the handsome Adam Levine. Even though he tactfully addressed her comments, it was obvious (seeing as they’re not together) that perhaps he didn’t feel a mutual attraction. Well, given she’s now put the goods on display, wonder what he thinks now?

What else should you watch? Check out our other editor’s video picks: