Marques Houston cuddles up to a new lust interest in his latest music video, and she’s so different that she renders him speechless. 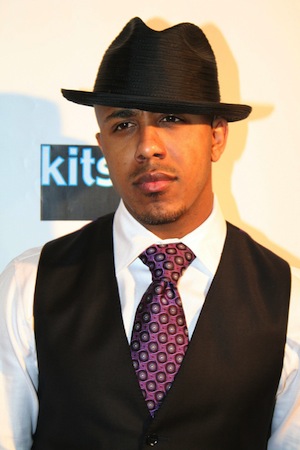 Given the chance, many ladies would make him speechless

You know what I’m talking about.

I personally would beat him up, but that’s because he still is “Roger” from Sister, Sister to me.

Fans of the sexy Marques Houston may scurry over to watch his latest music video for “Speechless,” because he’s fallen head over heels and he isn’t afraid to admit it.

Why am I recommending it? Besides the cameo from Bria Murphy (Eddie Murphy’s daughter) as reported by FinallyBrave.com, and Marques Houston’s puppy-dog eyes, the video pinpoints how a chance encounter could really change your love life.

Or at least reverse it in this case. The video has a time stamp that reverses to recap what transpired over the past few days. Marques has the gorgeous woman in front of him, and he seems like he has no words to describe what had transpired (ironic, since it is him singing).

As the video progresses/regresses, we notice that he’d been out with the guys, and an attractive woman wearing a bra as a shirt walks by and he can’t “help” but be drawn to her. (Apparently he has no control over his limbs and ends up floating toward her, and they have a heated romp back at a hotel.)

The couple does seem happy, and genuinely interested in each other based on their adoring glances and smiles. But does this send out the right message that you first have to hook up with a stranger to fall for them? I say they lucked out. You can tell me if I’m wrong, readers, but he seems “speechless” because he’s surprised she ended up being more than a body. Whatever the case may be, she really did a number on him (and impaired his senses). So now I understand the title “Speechless”.

What else should you watch? Check out our other editor’s video picks: