The actor was one of many, many celebrities mentioned in the last testament of suspected murderer — and ex-cop — Christopher Dorner. Now Sheen is pleading for him to end the Los Angeles–area manhunt. 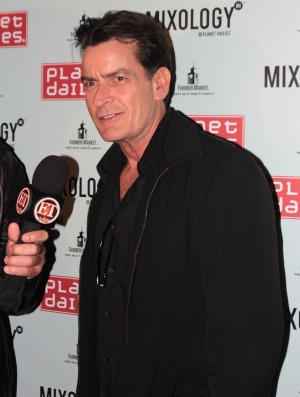 Ex-LAPD officer Christopher Dorner now has a $1 million reward on his head for the alleged murders of three people. The entire area is focusing on one of the largest manhunts it has ever been involved in, and now celebrities are getting involved. Rather, Dorner involved some celebrities.

One of those celebrities is speaking out, hoping to end the search for the suspected killer. In the manifesto, Dorner included Charlie Sheen, saying: “Charlie Sheen, you’re effin awesome.”

Sheen decided to try to use that attention to hopefully end the manhunt. The actor released a video Thursday, asking Dorner to give him a call.

“Christopher Dorner, this is Charlie Sheen,” the actor said in the video. “You mentioned me in your manifesto, so thank you for your kind words. I am urging you to call me. Let’s figure out together how to end this thing. Call me — I look forward to talking with you.”

The manifesto was lengthy and was mostly rambling, but Dorner did share his love for The Hangover series, saying he hoped they would end it after the third film. He also said World War Z and the second half of the third season of The Walking Dead look good. But in it all, he talked like someone who expected to die soon, saying would miss all those things.

The way Dorner talked made his statement seem more last testament than manifesto, but said he hoped it would clear his name regarding his dismissal from the police (which he says led to committing the murders). Sheen is taking the opportunity to try to end a terrifying situation for many in the LA area.