Victoria Beckham’s behind-the-scenes attire at NYFW is, you could say, avant-garde. Proving she’s anything but immune to the pressures designers face as the fashion world looks on, the mother of four tweeted the photo funny below. 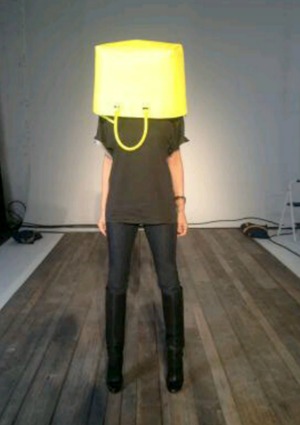 Though she’s infamously known for rarely cracking a smile, Victoria Beckham‘s sense of humor is far from lacking. Seen here Thursday evening as New York Fashion Week fervor carries on, the mom of four carved out a little time for a sanity check by popping a bag over her head.

“It’s that time in the season when we all get a little delirious #NYFW,” Victoria Beckham tweeted along with the image.

The designer has been chronicling behind-the-scenes moments for die-hard fashion fans to savor, including runway show preparations and the casting of models — complete with afternoon tea!

When asked why her line has been so successful since its 2008 launch, Mrs. David Beckham told Love magazine, “I do what I do because I love women; I’m a real girl’s girl. I want to empower women, I want them to feel good about themselves and that’s what the feedback is. That people get in one of my dresses and they feel good, they feel confident.”

Speaking of her in-demand dresses, the woman once known as Posh Spice added, “You know, they’re, I hate the word sexy, but hey… because it just sounds really gross but it makes a woman feel sexy without the dresses being overtly sexual, if that makes sense.”

Not sexy? She elaborated, “They quite often have quite high necks and they’re below the knee — but what makes it sexy is the fit, it’s the cut and that zip that goes right down the back of the dress… I wish I knew another word for sexy, because it sounds a bit like, eurgh. And it’s not overtly sexual you know, it’s not.”

Victoria Beckham’s latest line of non-sexy stunners is set to debut at NYFW on Sunday!