Justin vs. Nemo face-off for control of your television. Will it be East Coast weather updates or SNL Weekend Update? 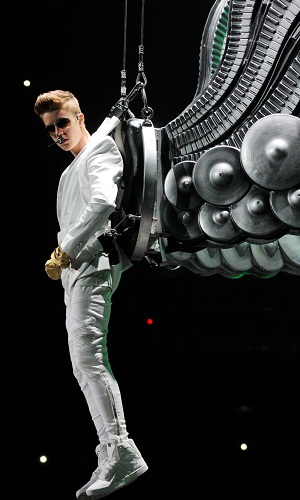 Not even winter storm Nemo can keep the Biebs away from Saturday Night Live! (Side note: When did we start naming winter storms?)

What does Justin Bieber have to say about the blizzard hubbub? “up real early today for a LONG DAY of rehearsals. and now ablizzard is coming. no issue. Im Canadian,” he tweeted Friday morning. “i promise u…u r going to laugh. #BIEBERonSNL.”

While most hosts and performers aren’t kept track of quite as closely, everyone has been on Bieber’s back about the upcoming appearance. When he left early from a day of rehearsals this week, many 10- to 14-year-olds became worried. MTV News talked to Bieber’s manager, Scooter Braun, though, and he’s promised Justin’s back in full working order.

“He’s good. He had a bit of food poisoning the first day, but he pushed through and did the whole day. He went to sleep really early that night,” Braun told MTV. “He was really great [Wednesday] and [Thursday] was his first day doing skits.”

Good to know he’s still on board for the show. We’re not promising comedy or musical gold, but it probably won’t be the worst thing you could DVR on Saturday night. (That honor would probably go to My Big Redneck Vacation airing at 11/10c on CMT.)

Check out these promos and see if they change your mind. They’re pretty cute!

So, will you be tuning in on Saturday night to catch a glimpse of Bieber’s sketch comedy skills and maybe get down to a little acoustic version of “Boyfriend?” If so, enjoy the show!