And here you thought those mindless spring break movies you sat through actually lowered your IQ! Turns out there are some pearls of wisdom you can learn from all those topless coeds. We gleaned a few gems to help keep you from winding up on the TV news during your vacay. 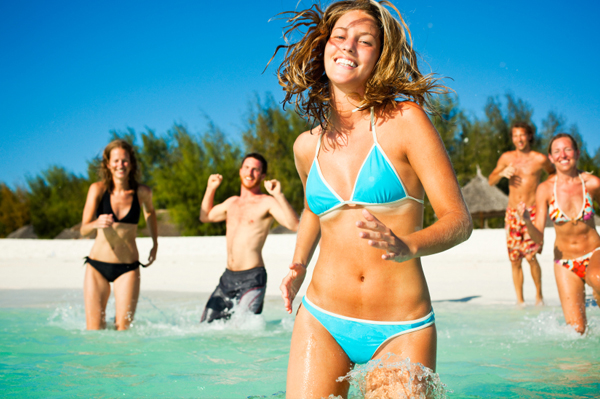 Don’t go in the water

During spring break, if you put together scantily clad coeds, enough alcohol to tranq a horse and water of any kind, the resulting equation almost always equals death by some sharp-toothed aquatic creature — not before a liberal showing of tanned T&A, naturally. By some odd order of the universe, natural disasters routinely occur around spring break every year to prompt the release of these bloodthirsty mutilators of partygoers. In Piranha 3D, an earthquake splits the floor of Lake Victoria, from which prehistoric piranhas emerge and proceed to gobble up naked underwater lesbians and topless parasailers. In Spring Break Shark Attack, a school of man-eating tiger sharks turns the blue waters off the coast of Florida into a bloody chum bucket filled with coed body parts. Bottom line? Don’t be seduced by the crystal clear waters. Head for higher ground, honey!

While you’re at it, don’t drink the water either

Going into the water may be the most surefire way to get massacred (or masticated) on spring break, but drinking it is right up there at the top of the spring break no-no list. Exhibit A? The death of Rider Strong (no, not Corey and Topanga’s BFF, Shawn!). When he and a group of buddies vacay at a remote cabin in Cabin Fever, they all fall victim to a vicious strain of flesh-eating bacteria — after drinking the damn tap water. And, let us assure you, bloody boils are not a good look for anyone. It’s also probably not a good idea to take cocktails from strangers, lest you end up on a gurney at the scalpel-wielding hands of an organ-smuggling-ring mastermind. Such was the plight of Josh Duhamel and friends in Turistas. Do yourself a solid — throw some bottled water into your bag and call it a day.

Sneaking off to have sex in the woods? Never a good idea.

How many Jason movies must one watch before grasping this concept: Bad things happen when you creep into the woods for clandestine nighttime nookie! Those crazy camp counselors at Crystal Lake learned this lesson the hard way — and by the hard way, we mean by getting brutally murdered by an angry, undead former camper in a hockey mask. College students Curt and Jules head into the great outdoors to get down in The Cabin in the Woods, only to encounter a family of zombified hillbillies — poor Jules doesn’t even survive long enough to get some good lovin’ from hot-bodied Curt first. In Primal, a couple wander away from their friends to partake of, well, each other. Oh, no big surprise here: Their moonlit dalliance leads to their demise from a virus that makes you sprout teeth like needles and chow down on your pals. The moral of the story? Keep it in your pants when you’re out of your room.

We don’t often advocate being a tool, but when it comes to spring break behavior, we’ll make an exception. While being nice any other time of the year might be rewarding, the only thing it generally rewards you with during spring break is death and dismemberment. Take, for example, the kind American couples in Mexico in The Ruins. When they run into a German tourist looking for his lost brother, they happily offer to help. Mistake #1. Following his lead, the Americans head to a remote Mayan ruin in the middle of the jungle. Mistake #2. Local villagers immediately accost the group with arrows and guns. One of the Americans tries to diffuse the situation but — Mistake #3 (and it’s a biggie) — this gets him an arrow to the body and a bullet to the head. Long story short, the group’s random act of kindness lands them stuck between a rock and a hard place or, in this case, irate villagers and murderous, supernatural vines atop Mayan ruins. So go ahead, forget about watching someone else’s back and cover your own a** instead — we won’t judge.