Ethan Hawke, did you fire your stylist or something? The actor shows off a dramatic and unflattering new look at the premiere of a new play in NYC. 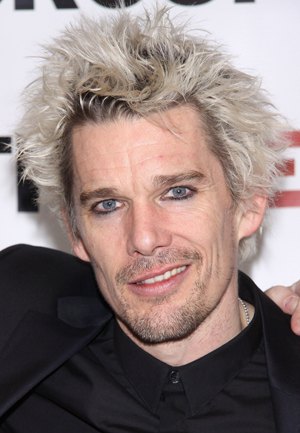 Ethan Hawke was white-hot in the 1990s, a bona fide heartthrob thanks to sensitive roles in big-hit films like Dead Poets Society and Before Sunrise.

But the actor was virtually unrecognizable when he showed up in Manhattan for the premiere of the new play Clive, which he directs and stars in.

Why the new look? The actor told the New York Times that his part in Clive — that of an aging, debauched rocker — begged for a switch.

“I didn’t want to feel like me when I did this role,” he said. “I’m trying to do that old-school, third-person thing by unlocking something as utterly superficial as my hair.”

So it was a Method thing?

“I was shooting for a Bowie thing, but then I saw a picture of him after I did it, and he didn’t really do his hair like this,” Hawke told the Times.

Wait, you mean Ziggy Stardust Bowie? That was a red rooster cut. Or did you mean 1980s Bowie with the white suits and baby-duck yellow feathered hair? Because that look should stay in the ’80s, baby.

Ethan Hawke is a dad again >>

Regardless, that white hair is a hard, hard look for anyone over 30 to carry off. Billy Idol was hot in his “White Wedding” days, but these days, ummmm, not so much.

Hawke has been doing more work onstage than on the big screen lately since his last high-profile film, 2007’s Before the Devil Knows You’re Dead.

But “with money on his mind,” writes the Times, he starred in the 2012 horror film Sinister and will soon appear in The Purge, a horror movie out May 31.

Before Midnight, the third in the Before Sunrise trilogy Hawke appeared in with Julie Delpy, performed well at Sundance and will go into limited release May 24.