Community is finally back and the study group is trying to cope with knowledge that this will be their last year together (maybe even their last semester). 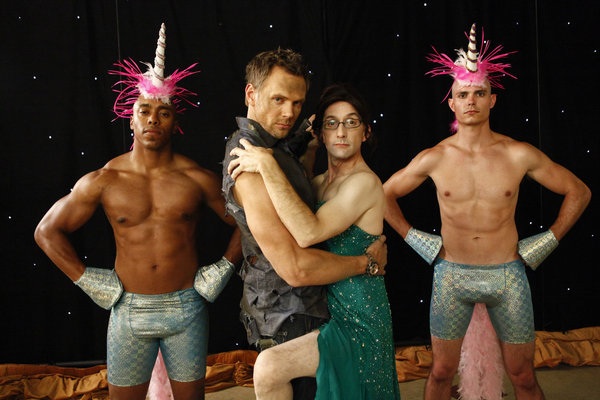 Community fans rejoice! Our favorite group of quirky college students is back for their final year at Greendale (and Jeff is looking insanely good this semester). Although graduating from college is usually a good thing, the group is having a difficult time adjusting to the change.

Jeff (Joel McHale) arrives on the scene with his self-proclaimed title New Jeff. New Jeff puts the group before himself, ignores hot women for the benefit of the group and saves seats for his friends in the crowded classroom. What everyone else doesn’t know is that New Jeff is one history credit away from graduating and then he’s ready to move on with his life. This isn’t going to go over well.

When the only history class offered this semester, History of Ice Cream 101, gets over booked, Dean Pelton creates an obstacle course to decide who gets to take the class. Arriving in a red dress in a carriage drawn by two shirtless men, the Dean declares the beginning of Hunger Deans! To get in the class, each student has to conquer a course and capture a red ball (no hidden meaning behind that one).

Unfortunately, the rest of the study group doesn’t want to partake in Hunger Deans, if it means Jeff graduates a semester early. Even though that’s ridiculously selfish of them, Jeff decides to try to win seven balls so they can all take the class together.

Meanwhile, Britta (Gillian Jacobs) and Troy (Donald Glover) are enjoying their new romance by getting in a fight and wrestling each other in the wish fountain. Annie (Alison Brie) and Shirley (Yvette Nicole Brown) are suffering from senioritis and skip class to fill the Dean’s car with popcorn. Pierce (Chevy Chase) was there, holding balls, knowing there was a joke to be made but just couldn’t figure it out. And Britta broke Abed when she told him to go to his happy place when he was feeling anxious about change. This sent him into an inception-like layered dream state where he envisioned the gang as a sitcom filmed before a live studio audience (don’t we all miss those days) and as an animated cartoon called Greendale Babies.

Jeff wins six balls, but they get stolen by Leonard when the group is attempting to pull Abed back to reality. But, just when it looks like he’s out of luck, Dean Pelton admits he toyed with the schedule so Jeff wouldn’t graduate early. However, he’s being forced to bring in a real history class or the school loses funding.

As usual, everything works out in the end. The gang gets to take the class together, everyone accepts that change is scary but good and Jeff will finally get to graduate it.

There is, however, a few little hiccups. The Dean bought the condo right next to Jeff’s (his way of not letting go) and Chang is back, drenched in water and half naked! Oh what kinds of trouble will that little man get into this season?

Meghan Markle Is Absolutely Glowing in This Early Peek at Her Pregnancy With Baby No. 2