The Mystic Falls crew has landed on an island off the coast of Nova Scotia to find Silas and the cure, but they’re in for a little more trouble than they expected 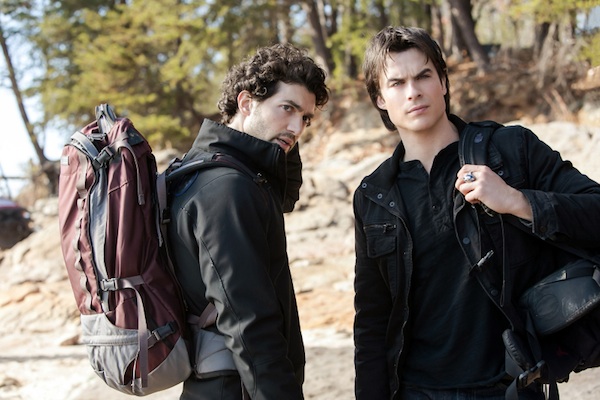 Two rival female vampires, two competitive brothers, a vampire hunter, a witch and a sneaky professor arrive on a dangerous island to find the coveted vampire cure. This is bound to go smoothly, right?

To no one’s surprise, Professor Shane (David Alpay) hasn’t exactly been honest about his knowledge of the cure. He was actually on this island a year earlier because it was rumored that a drop of blood could resurrect a dead loved one.

His son died in a car accident and when his witch wife (no really, she was an expressionism practicing witch) tried to use her skills to bring back their son. The power of the spell killed her. He went to the island, bled a little and saw a vision of her where she explained about Silas and how he can bring people back.

Not only is his mission self-centered, Shane is also using the opportunity to annoy and backstab everyone he can. He rubs it in Damon’s (Ian Somerhalder) face that if Elena (Nina Dobrev) takes the cure, she won’t love him anymore. Then, he steals Rebekah’s (Claire Holt) tombstone and has Jeremy and Bonnie kidnapped by some face-painted local hunter person (we don’t know that guy’s story quite yet). So everyone hates Shane even more now.

Back in Mystic Falls, Tyler is ignoring such clichés as “don’t poke the beast,” aka don’t taunt the vampire locked in the invisible box. Klaus is looking pretty pathetic while he awaits the spell to be broken and set him free from his cage in Elena’s house, and Tyler takes the opportunity to antagonize him a bit. Tyler says he’ll force Klaus to take the cure, then the sire bonds will be broken then he’ll kill him in an extremely slow and painful fashion. He just hasn’t decided how yet.

Tyler’s doing all this with a pompous smile on his face, that is until Caroline crosses the invisible line, Klaus stabs her in the stomach and then bites her neck, leaving her to die! He wasn’t right to do this; it’s just what happens when you toy with wild beasts.

Now, Klaus has to give Caroline his blood or she’ll die, but he’s holding out because he hates Tyler. Caroline uses his love for him to persuade him to save her. She tells him that she knows there’s a little bit of human left in him and that means it’s possible for him to change and be something good. It was a beautiful speech. He cried a little and then let her feed on him.

Rebekah is becoming very likable and is trying to make amends with Elena, but she’s still really p-o’ed about the whole Elena killing her brothers issue. A little love affair seems to be blossoming with Stefan (Paul Wesley) and Rebekah. Also, a hunter attacked Damon, and he looked dead, but he’ll be back next week. Oh the cliffhangers that get ruined by next week’s previews.