Uh-oh! It looks like 90210’s Tori Spelling recently ended up stranded and away from home. And with four kids in tow, too! 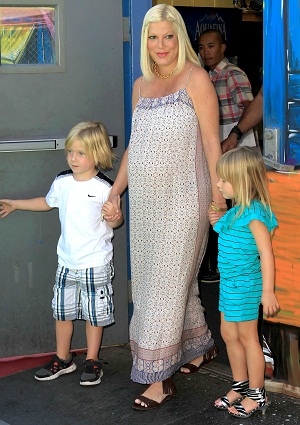 Yesterday, a series of unfortunate events led to the 39-year-old actress/author ending up stranded roadside with her four kids and pup. Their car had a fuel leak, and all they could do was hop out and wait to be rescued. How awful!

Spelling tweeted about the ordeal, “4 kids. 1 dog. 1 car leaking gas broken down on the side of the road= not a great road trip.”

I’d say not! The actress also sent out an Instagram picture from roadside. The pic showed her surrounded by her children, Liam, 5; Stella, 4; Hattie, 1 and baby Finn in her arms.

Where was her hubby, actor Dean McDermott? It appears he wasn’t along for this road trip. What was Tori thinking bringing all those kids on a trip without help from dad? She’s already freely admitted that life with four kids is a little tough sometimes.

“It has put us over the edge. They’re 10 months apart, Hattie and Finn,” she recently told the ladies of The Talk. “It got a little crazy going from three to four. It’s basically like having twins at home. It’s overwhelming.”

She definitely tried to pull off a super-mom-type feat, but her plan certainly backfired. Hopefully, the actress was able to quickly come up with some roadside fun to help entertain all those precious kids and keep them distracted from the nearby road.

Despite a mile-long list of credits to her name, Spelling isn’t working on films as much as she used to back when she had fewer kids. Though she could be seen on TV back in December when ABC Family unveiled their original Christmas movie, The Mistletones. These days, she’s focusing on being a good mama and updating her awesome website, EdiTORIal, which is stocked with fun ideas for kids’ valentines, yummy breakfast, pictures of her super-cute sweeties and a little bit of product placement.

Hopefully our girl and the kids made it home safe!