Finn gives the New Directions a diva theme to explore; Sam and Santana fight for Brittany; Tina and Blaine connect on a deeper level; and Kurt attempts to bring Rachel back down to earth.

The New Directions’ leader is taking a new direction 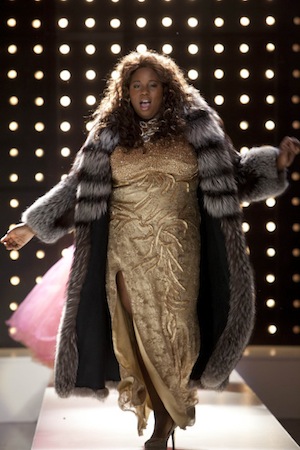 Emma is lonely, as Will (Matthew Morrison) is off somewhere — and Finn (Cory Monteith) is there to keep her company? That doesn’t sound dangerous at all. He confides in his old guidance counselor about his fear of dating again — which seems reasonable, until he realizes how pure and charming she is — and his facial expressions throughout the episode signal to viewers he may be feeling more than admiration towards her.

He brings her into glee club practice where she inspires the students with her dissection of what a diva is — and evokes a brilliantly entertaining performance from the diva/os – Kitty (Becca Tobin), Marley (Melissa Benoist), Brittany (Heather Morris), Unique (Alex Nowell), and Blaine (Darren Criss).

Later, during a typical Emma freak-out, he goes to calm her down and ends up kissing her. She didn’t exactly turn him away… I wonder where this will leave the woman that is about to get married and was only confiding in Finn to choose items for the wedding.

(Bi)Curious about your feelings for a BFF?

Tina (Jenna Ushkowitz) and Blaine experience the most gut-wrenching, emotional moment I have yet to witness on Glee this season. Blaine falls sick with a common cold, and at every turn Tina is there providing him medication and food in hopes to heal him. She parlays the notion of being a diva, knowing what she wants and going after it. However, she gets frustrated with the lack of progress she seems to be making. That is until Blaine invites her over after school to find a song for her to sing for glee club. 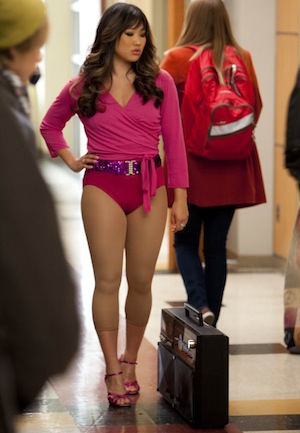 This was and that epic moment where you connected with the character and you didn’t see it coming. She summons the courage to be blunt with Blaine, and she begins confessing her feelings for him. He fell asleep like a narcoleptic puppy, and clearly her expression fell on deaf ears. Suddenly, she begins unbuttoning his shirt — but, instead of making a move like I assumed she was going to, she goes to put Vicks VapoRub on his chest.

The next morning, he wakes up clueless, and at school, Tina gets fed up with the lack of gratitude and abruptly tells Blaine off — Only to go off into the common area outside and perform an exceptionally ferocious version of Madonna’s “Hung Up.”

Tina is becoming a favorite of mine. She’s warm and loving but feisty and driven. Great combination.

Out of the park performances in NYC

In other news of people hitting home runs, Kurt (Chris Colfer) and Rachel (Lea Michele) duel at the midnight competition and sing off to “Bring Him Home” from Les Miserables. This is the first time since the showcase we get to witness Kurt’s true talent; Rachel is plateauing, as she is a strong singer and performer — but, as Kurt put it, he outshines in the vocals department. It was a moving rendition, but Kurt possessed emotion where Rachel felt a little artificial (but tried to recover at the end with a tear). The audience sensed this and ended up voting Kurt winner.

Later, when Rachel seems dejected and refuses to audition for a play she’s sought after for as long as she can remember, Kurt gives her a reassuring pep talk. The series of events — her loss and his heart-to-heart — ends up giving Rachel the reality check and mature confidence (not brash cockiness) she so desperately needed. Plus, Kurt seems renewed with a confidence and maturity that is quite becoming of him.

Santana (Naya Rivera) keeps reappearing at McKinley High, and we finally found out it’s because she dropped out of college. This episode was one where she reigned queen — she gave a stellar performance of “Nutbush City Limits” and “Girl on Fire,” and crowned herself top diva singlehandedly. She rocked sexy outfits this episode — one trumping all others: a fuchsia body-con dress.

Santana’s initial plans were revealed that she wanted to go to New York, but with the job offer from Sue (Jane Lynch) to oversee the Cheerios, combined with her discovery of Sam (Chord Overstreet) and Brittany dating — she considered staying in Lima for good.

While Santana was cornering Sam and attempting to intimidate him into forgetting about Brittany, Brittany was off considering how to break it to Santana that she wants to be with Sam. She helped guide Santana into pursuing her dreams, and as a result she showed up at Finn and Rachel’s door claiming she was moving in.

What do you think Gleeks? Will Emma tell Will about Finn kissing her? Will the wedding still happen? Is Finn going to finally move on from Rachel with Emma? How about Blaine and Tina — are they going to end up an item? Did you like how this week revolved mostly around the alumni and not the new generation? Let me know what you think below!

Next week looks exciting — I hope our questions get answered!

Here’s what else you may have missed on Glee