In this week’s People cover story, Kelly Clarkson promises that she’s “not going to be a bridezilla” with her upcoming fall wedding. She’s just totally chill about the whole thing. 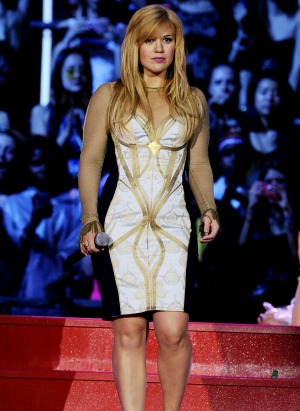 Kelly Clarkson is one happy fiancée. The bride-to-be has already shared every minute of her engagement details, her “earthy” theme for a fall wedding, and now she’s promising, in an interview with People, that she’s “not going to be a bridezilla.”

She actually told the entertainment magazine, “I’m going to be like, ‘Oh, the cake fell off the porch, that’s fine. Cool, something’s on fire, cool, whatever, we’ll move it. We’ll get married over there.’ I’m going to be that girl.”

Clarkson got engaged in December to her boyfriend of a year, Brandon Blackstock, a country music talent manager. Blackstock is the son of Clarkson’s own manager, Narvel Blackstock. The elder Blackstock is married to country superstar Reba McEntire.

About a month before her engagement, the 30-year-old singer knew an engagement was pending and she already had a wedding ceremony in mind.

She told Ellen DeGeneres, “We will totally, probably elope.”

It looks like the American Idol Season 1 winner’s plans have changed. Now, the couple is scheduling an outdoor fall wedding at the home they share in Nashville, Tennessee. Clarkson hopes to honor her home state of Texas with yellow roses as a part of the decor.

Whether Clarkson elopes or marries in front of family and friends doesn’t really matter. What matters is the Grammy winner is happy and in love.

As she told People, “I didn’t know life could be this happy.”