Lucy Lawless has been sentenced for her protest aboard an oil-drilling ship. Despite a fine and community service being ordered by the judge, the actress asserts she’s won a “great victory.” 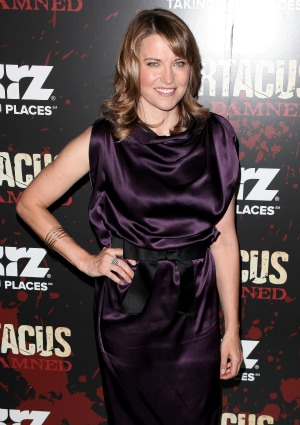 Lucy Lawless‘ Greenpeace activism is going to cost her — a relatively small amount. A judge has gone easy in sentencing the Xena: Warrior Princess actress for her Feb. 2012 role in a protest aboard an oil-drilling ship.

Lucy Lawless and seven other disobedient do-gooders, who all pleaded guilty to trespassing charges, have been ordered by a New Zealand judge to pay $547 to a port company and complete 120 hours of community service.

The fine is a far cry from the $545,000 in reparations that was sought by oil company Shell, whose vessel the Noble Discoverer was delayed after the 44-year-old spent four days atop the 174-foot tower, camping and blogging about her cause.

“I’m blocking Shell’s Arctic drillship because I believe passionately that renewable energy is the way of the future,” the aptly-named Lawless explained at the time. “We don’t have to go to the ends of the earth to suck out every last drop of oil. Instead we need to smarten up and begin the transition to a clean, green, sustainable energy future and right now that means keeping Shell out of the Arctic.”

“I consider it a great victory that the court has struck down the reparation demand from Shell, which I think was absolutely ludicrous,” Lucy Lawless said in response to the sentencing.

The Associated Press noted the actress said she was happy to clean toilets, pick up litter or do whatever else was required for her community service — and that she has no regrets about taking part in the protest.

Breaking the law and helping highlight concerns about oil exploration in the Arctic is all in a day’s work for Lucy Lawless!