What the heck, Dave?! You forgot to send us the memo about your week-long coverage on Chelsea Lately. 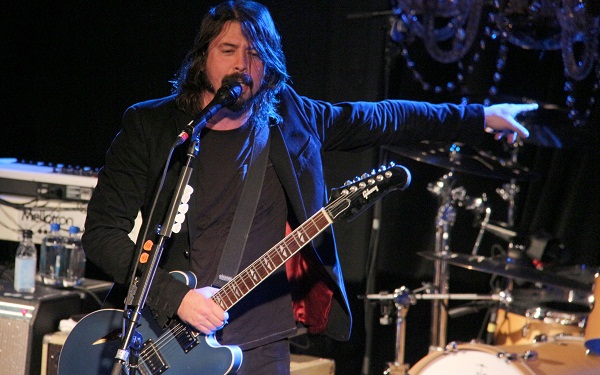 Foo Fighters frontman Dave Grohl did such an awesome job hosting Chelsea Lately last time the host, Chelsea Handler, went on vacation that she decided to ask him back to do it again. My love for the one-time Nirvana drummer knows no bounds, so I was stoked to find out and eager to share the fun with you! Sadly, I didn’t get the memo that this was happening until mid-week. My bad!

To make up for it, though, I’ve scoured the internet to find some of the funniest clips from Grohl’s first three days as host. Basically, Dave reports on all the things we’ve already told you this week on SheKnows. But instead of reading, you get to look at Dave’s pretty face…

In which Dave talks about BritBrit while wearing the most fabulous shirt ever (he needs to send that to me):

Finally, Dave and Rick Springfield explore public domain in order to give that creepy little co-host, Chuy, something to dance to:

Thank goodness Dave is such an attention whore or we’d never see him (I promise I mean that lovingly.) It makes sense now that his new documentary, Sound City, has finally been released. The doc tells the story of the legendary Sound City recording studio and features interviews from some of the biggest names in music like Neil Young, Stevie Nicks and Tom Petty. The doc also spawned quite possibly the best supergroup known to man, the Sound City Players. The band’s rotating lineup includes what’s left of Nirvana, various Foo Fighters, the aforementioned Springfield and Nicks and the legendary John Fogerty (plus anyone else Dave happens to run into the night before and invites onstage.) Word has it the Players might soon find themselves in an arena near you (and you can bet I’ll be there!).

In the meantime, there’s still tonight left to catch Grohl on Chelsea Lately (plus any midday reruns of shows from earlier in the week). Lately airs on E! at 11/10c.

Sound City: The studio that redefined recording
12.12.12. Concert for Sandy Relief: A review
Foo Fighters are on hiatus, not breaking up