With a divorce in the works, an aging dog and a recent bout of the flu all conspiring to bring down Bethenny Frankel, it’s no surprise she’s feeling a little down. But she soldiers on with her new talk show. 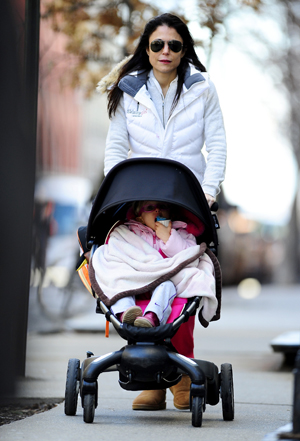 Bethenny Frankel’s messy divorce is painful, but there’s a good side to it, the star tells Extra.

“Right now I’m sort of good and terrible,” she says. “I’m going through something very difficult. And you know what? Every dark cloud has a silver lining. I do have a beautiful daughter and I have a lot of things to be thankful and grateful for.”

Said beautiful daughter, Bryn Hoppy, is 2, and the product of Frankel’s marriage with Jason Hoppy.

Hoppy emerged as somewhat of a reality villain after he and Frankel fought through the reality show they starred on together, the Real Housewives of New York spin-off Bethenny Ever After. He’s since been criticized for seeking primary custody of Bryn and “exclusive use and occupancy” of the couple’s swanky apartment.

The couple married in 2011, when Frankel was seven months pregnant with Bryn.

Frankel’s frankness is a good advertisement for her new talk show, Bethenny, which had a six-week test run on Fox this summer. No premiere date has yet been announced, but the fact that she’s out promoting and talking to Extra probably means, ya know, soon.

When asked how she manages to do it all, Frankel told Extra, “I definitely multi-task. I prioritize. It’s like Nike says… you ‘just do it.'”

Sounds like it’s been a “just do it” kind of week: Today she tweeted, “Wow! Bryn & I had that nasty 24 hour bug & I had to do a Skinnygirl photo shoot today! Can’t wait to get home & snug.”

This was after yesterday’s tweet about her dog: “My first baby @cookiedabooboo is limping. She’s 12 & it makes me sad & gives me anxiety.”

52 mins ago
by Alyssa K. Davis