Crystal Harris says she would prefer not to comment on her sex life with Hef, but she lets the cat out of the bag anyway with her throwaway comments about snuggling and board games. 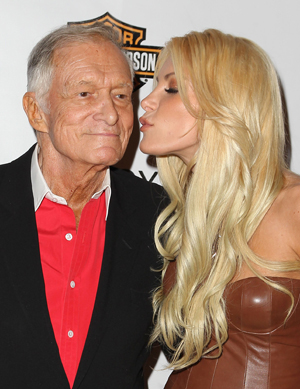 Do 86-year-old Hugh Hefner and his 26-year-old bride, Crystal Harris, get it on?

“No comment,” Harris told Huffpost Live on Wednesday, before dropping a weird reveal-bomb.

“I feel like since Hef is older now and he’s had… the phase of his life, the phases of all the girlfriends and all that kind of stuff,” Harris stuttered a bit nervously. “I feel now is more, you know, like cuddling up and watching a movie or playing backgammon. We play Uno with the girls… dominoes.”

Quick question, Hef: How come you can’t play dominoes with a fellow octogenarian?

When asked what being married to Hef is like, Harris quickly switched the focus from her new husband to the Playboy Mansion, where she says she enjoys being “the lady of the house.” The mansion is a great place to be, she enthuses, an odd statement from a newlywed. We’d expect her to be gushing over her new husband instead.

Harris says she spends a lot of time with Hef, working on his scrapbooks. He has thousands of images, she says, and they sometimes tweet pictures together.

Crystal Harris said she had sex with Hugh Hefner only once >>

A VICE magazine reporter visited the mansion this week and confirmed this part of Harris’ tale in his story “I Went to the Playboy Mansion (and It Was Kinda Depressing),” noting that in the laminated list of extensions that sit by Mansion phones, “THREE separate extensions” deal with scrapbooking.

Anyone else flashing on the scene in Best in Show where trophy wife Jennifer Coolidge talked about how much she and her elderly husband had in common because “We both love soup?”

Harris inadvertently paints a picture of Mansion life that dovetails with many years of rumors: Instead of being a hedonistic party palace, the mansion has a weird summer-camp-like atmosphere, with a rigid schedule of regular, wholesome events.

“We have movie night and buffets every Friday, Saturday and Sunday,” said Harris.

When asked about the age difference between her and Hef, Harris lamely offered that she learns a lot from him. Like what? Oh, about “classical films.”

Translation: Hef makes this 26-year-old watch old movies. With that, plus pasting 50-year-old images of naked ladies into innumerable scrapbooks, it sounds like Harris’ marriage is really, um, spicy.