iTunes meets a major milestone just months before its 10-year anniversary, and vinyl sales are on the rise. Modern, meet vintage. Discuss. 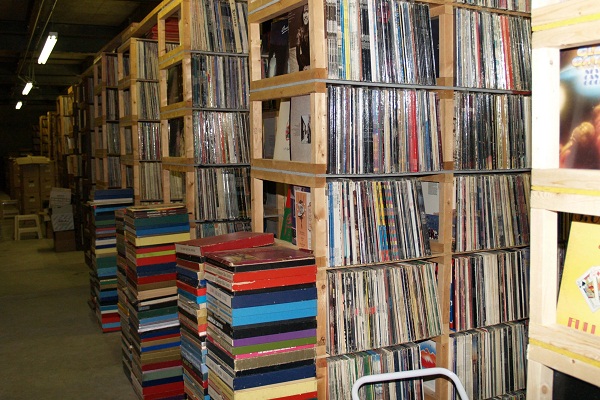 Downloads aren’t the only ones doing well.
Vinyl sales are on the rise.
We’d kill for a collection like this!

When Phillip Lupke made his latest purchase on iTunes (“Monkey Drums” [Goksel Vancin Remix] by Chase Buch), he had no idea just how iTunes rich he was about to become. That purchase marked the 25-billionth song purchased from Apple’s internet music downloading site. To say thanks to Lupke, iTunes awarded him a 10,000 euro iTunes gift card, and music fanatics everywhere just groaned aloud in jealousy.

A little less than 10 years after iTunes launched (in April 2003), the store is beginning to need one of those burger-counter signs like back in the glory days of McDonald’s. Though, at this point, perhaps their sign would just say, “Billions and billions sold,” too!

If you think paying for music is a thing of the past, you’re clearly wrong (and a criminal, according to multiple laws). According to Billboard, iTunes is averaging 21.6 million songs sold per day. Now, iTunes sells more songs in 12 hours than it did during the first five months after it went live.

Billboard says that 29 percent of all music sales (including those in physical formats like CDs and vinyl) are by iTunes, making them, according to one Apple VP, “The number one music retailer in the world.”

Things aren’t just looking up for iTunes either, though. The yearly report from Nielsen Soundscan and Billboard found that total music purchases (digital songs, digital albums and physical albums) reached an all-time high last year and rose 3.1 percent over 2011. And sure, sales of physical forms of music (those things called CDs) continued to fall. However, the resurgence of vinyl continued. While CD sales saw a loss of 13 percent, vinyl sales grew by nearly 18 percent. What?! That looks like proof that Spotify and Pandora aren’t killing the music industry but instead are helping it to flourish by helping to spark interest in new music!

Are you still buying music? Are you browsing the CD collection at Target, shopping vinyl locally or just hitting up iTunes and Amazon?

More from our Music page