Rayna and Juliette are still on tour, but things are just as dramatic on the road as they are back in Nashville. 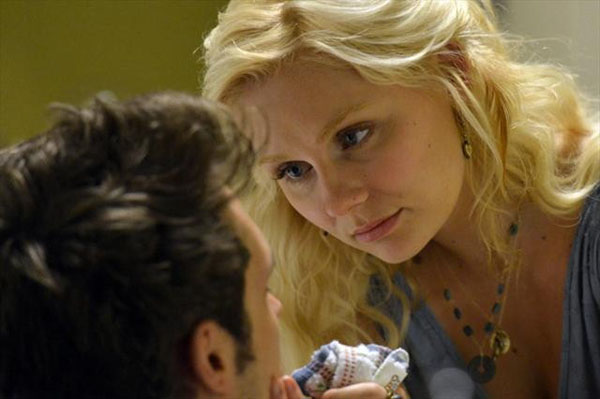 Juliette goes back to basics

The mere presence of Deacon Claybourne in Juliette Barnes’ band has her in an existential crisis: Does she have the chops to make it as a serious artist, rather than a manufactured Taylor Swift clone?

She might think she does, but no one else in her inner circle does.

Juliette (Hayden Panettiere) finally takes a chance on night two of the Chicago shows and performs an acoustic song she penned with Sir Crowsfeet (that’s Deacon, of course). Her manager is seriously upset over it — thanks to a bunch of negative tweets from a music reviewer in the audience.

However, her long-suffering assistant loves it — and so do her fans. The video quickly goes viral on YouTube.

So, is Juliette really going to change her image? She’s trying.

Scarlett and Gunnar take their sexual tension up about 25 notches after she asks him to move in with her — as roommates, only. The why-don’t-you-just-hook-up-already pair need each other right now. Gunnar’s roommates are giving him crap for joining a new band — and Scarlett can’t afford the rent without help.

The only problem? Who else but Avery. He might have the big, bad record deal, but he’s seriously unhappy. He finally brings over the rent money he owes Scarlett as a mea culpa but flips when he sees Gunnar there.

“Just remember I had her first,” Avery tells Gunnar before punching him.

Too bad for him, because Gunnar actually knows how to throw punches — and respect a woman.

However, they may not have money problems for long. They might have a record deal in the works with Rayna’s new record label, but they just don’t know it yet. Let’s hope they get signed — with their new band — and give Avery a big middle finger.

Teddy Conrad’s biggest downfall is that he’s such a beta boy when it comes to Rayna. He lets her walk all over him and take time to “think things through” for weeks while she’s (now) off touring the country with ex-bf/soulmate Deacon.

Not anymore. Mayor-elect Teddy is all about what Teddy wants now. And apparently, what he wants is Peggy. His former colleague is all recovered from her suicide attempt and living in a townhome away from her husband. She randomly sees Teddy on the street, and they talk as he undresses her with his eyes.

And of course, they sleep together.

Afterward, Teddy expresses a bit of regret — though not the guilt we’d expect from a man trying to make his marriage work.

As for Rayna (Connie Britton), she’s trying her best to be civil with Deacon, but he seems hell-bent on giving her the cold shoulder. They have several awkward run-ins in the Chicago hotel elevator, until Deacon finally bites the bullet and gives his ex- some much-awaited (on our part) tongue action.

“I’m through talking,” he tells her.

Anyway, later she texts Deacon to come up and “talk,” though we really know it’s an excuse to get busy. There’s a knock on the door, and Rayna opens it, expecting Deacon.

After a few minutes, he says the magic words: “I want a divorce.”

So, will Deac and Ray end up together? Fingers crossed, but nothing ever ends the way it should on Nashville.