Surprised? Chris Brown seemed to walk out of court a happy man with none other than Rihanna on his arm. 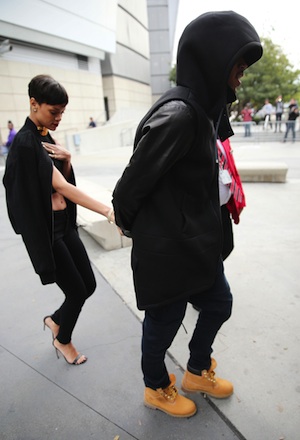 Earlier today, we told you that Chris Brown faced a probation violation after the Los Angeles County district attorney’s office filed a motion claiming Brown falsified his court-ordered community service requirement of 180 hours. Brown showed up to court Wednesday afternoon — with girlfriend Rihanna (gasp!) — but walked away a free man, for now.

Did you fall for the Chris Brown Instagram hoax? >>

Chris Brown gets off easy with Frank Ocean >>

Mark Geragos — an attorney with a reputation for representing clients with poor public reputations — wasted no time trashing the district attorney’s office to the press after Chris Brown’s court appearance. TMZ’s cameras recorded Geragos lashing out at prosecutors, saying that “what the DA claims is false. And I don’t mean false, I mean fraudulent. In fact, you will see in the motion that was filed today that as soon as the DA’s motion became public, the Richmond [police department] responded last night and again this afternoon — unprovoked by anything other than the news report — and claimed that it was demonstrably false on at least five different, separate instances than what the DA claims.”

Chris Brown claims he did community service in a Virgina child care center, but prosecutors are skeptical because many of those hours are unverifiable. Moreover, Brown’s mother signed off on the community service, and she was once the director of the day care facility. However, TMZ reports Geragos filed documentation with the court saying that Brown paid over $30,000 to Richmond police for security on the days he said he volunteered in the area.

Geragos continued, “This motion frankly, was a travesty, is a travesty. [Prosecutors] got nowhere and no traction with it whatsoever… When we get done with them, I plan on asking for not only sanctions but an order to show cause hearing as to why the deputies connected to it shouldn’t be held in contempt of court for filing false documents with the court.”

Yet another Chris Brown assault >>

The attorney went on to explain than in the last 30 years of practicing law, he “has never had a client that has been tortured by a DA’s office on probation like Chris Brown has.”

What do you think: Are Los Angeles prosecutors after Chris Brown?