The “Stronger” singer is floating on air, enjoying her engagement and getting ready for a spin on the Grammys stage on Feb. 10. 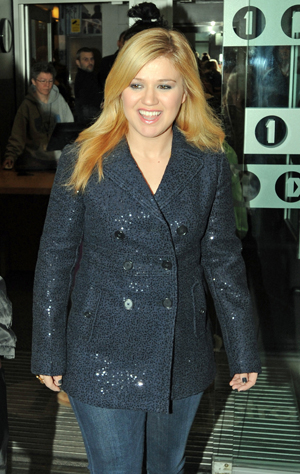 Something tells us there’s a stack of bride magazines on Kelly Clarkson’s bedside table: The singer gushed to People that she’s keeping busy planning an “earthy” fall wedding and just enjoying being madly in love.

“I didn’t know life could be this happy,” she said.

She said the moment fiancé Brandon Blackstock proposed in the couple’s shared Nashville home was sheer kismet: “Out of nowhere I just said, ‘Thanks for being an awesome guy.’ I’ve never been loved properly by a man, and I was just like, ‘I thank you so much for that.'”

What she didn’t know: Blackstock had already chosen that moment to pop the question. “Not a damn clue!” she said. “If I did I would have worn something besides Uggs and a sweatshirt with no bra.”

Sartorial matters aside, Clarkson is known for singing a series of “I Will Survive”-esque pop songs. Why does she take on triumph over heartbreak in so many of her songs? Is it because she’s a hardened vet in the love wars?

She told People she was never really in love before. “I was dating skinny jeans and I needed Wranglers,” she said.

Blackstock and Clarkson’s wedding will be a down-home affair in Nashville: “Think yellow roses for Texas,” writes People.

One piece of advice, Kelly: Resist the temptation to get married barefoot. As a flock of 1970s homespun brides could tell you, you’re just asking for your grandkids to bring your wedding pictures to school for their entire class to laugh at.

Clarkson also told People she was prepping not one, but two new albums. Clarkson will perform on Sunday’s Grammy Awards.