Despite a severe knee injury after a harrowing crash on Tuesday, Lindsey Vonn will be back on the slopes for the 2014 Sochi Winter Olympics. 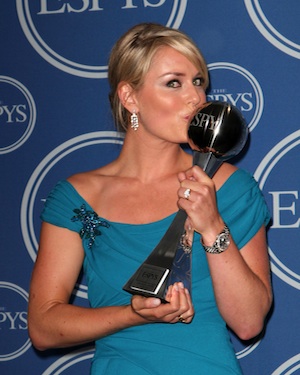 Lindsey Vonn suffered a season-ending injury on Tuesday but despite the harrowing crash, says she plans to return to competitive skiing within the next year.

Vonn crashed while rounding a turn in the super-G event of the Alpine World Ski Championships in Austria. She was airlifted after the crash and later revealed to have suffered an extensive knee injury which will require immediate surgery.

A fatal crash at the Winter X Games in Aspen >>

“There’s a very good chance she could return full force,” said Hackett. “Typically, the ACL alone will keep her out six to eight months, at least at the high, intense level of skiing she’s used to. The MCL can often heal on its own. And a fracture with an ACL is commonly a minor component.” Hackett continued, “Each case has variables, and they will likely take more tests before there is a real treatment plan. But we’ve had a lot of skiers and snowboarders come back in a year and do very well.”

Dr. Hackett is a team physician with the United States Ski and Snowboard Association but is not treating Lindsey Vonn, nor was he specifically briefed on the details of Vonn’s injury or treatment.

It looks like Vonn’s medical team agrees with Dr. Hackett, as Vonn announced her decision to return to skiing in October 2013 and compete in the 2014 Sochi Winter Olympics next January. Vonn released a statement in which she expressed hope and optimism for her success next season. “I am grateful to my fans for the outpouring of support, which has really helped me to stay positive,” said Lindsey. “I can assure you that I will work as hard as humanly possible to be ready to represent my country next year in Sochi.”