The Today Show springs a Saved by the Bell reunion on Tiffani Thiessen, but she doesn’t look too happy about it. 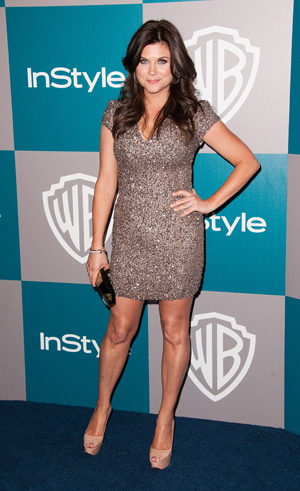 Poor Tiffani Thiessen. It’s been almost 20 years since she starred as cheerleader Kelly Kapowski in lightweight teen show Saved by the Bell, but the Today Show won’t let her get past it.

The show sprang a surprise reunion of sorts on Thiessen when she appeared Tuesday morning to promote USA Network crime series White Collar, on which Thiessen has played the part of Elizabeth Burke, a wifely helpmate to her FBI husband for several years running.

Get it, people? Saved by the Bell is over! I’ve moved on!

Not so fast, Thiessen: She was about to take part in what she believed to be a trivia contest on classic television when (booooing!) out came Dennis Haskins, better known as fun-squelching high school principal Mr. Belding on Saved by the Bell.

A Saved by the Bell reunion! Who wouldn’t love that?

Thiessen, that’s who, whose frozen smile and dead eyes revealed to the camera just how thrilled she was.

Haskins, whose IMDb profile shows he works sporadically (he did a guest spot on Mad Men on 2012! Who knew?), has been spoiling for a Saved by the Bell re-up for some time, as has series star Mark-Paul Gosselaar.

The two of them told TMZ in January that they were up for a reunion: “Honestly, the fans still love us and our show so much,” Haskins told TMZ, while Gosselaar told a TMZ photographer that he was watching the upcoming Boy Meets World revamp, Girl Meets World, for clues as to whether a Saved by the Bell reboot would work.

“As for the rest of the cast, getting them together may be tricky — Jimmy Fallon nearly made it happen in 2009… until Tiffani Thiessen put the kibosh on the whole thing,” wrote TMZ.

Whoops, guess Today didn’t read TMZ’s story or they might not have surprised Thiessen.