Shell-shocked Jack covers up his involvement in Rizzo’s death to save his relationship with Mia. But is compromising his values and lying to everyone he loves worth keeping his secret? 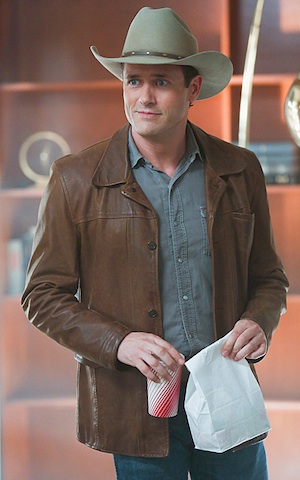 Lawman Jack Lamb (Jason O’Mara) just shot and killed dangerous mobster Johnny Rizzo. It was all in self-defense, so the next obvious step would be to tell his brother, the Sheriff, what happened. Right? Unless you’re dating the mobster’s daughter and it would end your relationship if she found out.

Then you have to flee the scene, lie about it, and turn into a shady criminal. But a girl as beautiful as Mia Rizzo (Sarah Jones) is probably worth all the moral compromising this guy is about to do.

There are a few things Jack did to cover up the shooting that is going to be hard to come clean with later. First, he left the scene of the incident and took his gun with him. From all the Law & Order marathons I’ve watched with my mother, I know that’s a sign of guilt.

He was probably trying to play it off like the dead junkie and Rizzo got into a confrontation, but that story’s not going to fly with professionals like Ralph (Dennis Quaid) and Katherine.

In a shell-shocked comatose state, he goes straight to Mia to deliver the news of her father’s death. When she crumbles to the ground in tears, he doesn’t have the heart… or the courage to tell her the truth. Then, he goes to Savino (Michael Chiklis) and they both agree to keep the secret together. Bad ideas all the way around.

Refusing to tell Ralph and Mia the truth is an ongoing bad move, but on top of that, Jack allows someone else to be considered for Rizzo’s death. Ralph and ADA Katherine (Carrie Anne-Moss) come up with “the third man” idea that simply explains that there was a third person in the room. It’s not a genius idea, it’s just pretty obvious. So, they call in the junkie’s boyfriend and Jack actually lets the blame fall on him!

Downward spiral at this point

The problem with lying is that it never stops at just one lie. You have to tell another lie to cover that lie, and soon things get out of hand. Jack really crosses the line when he intentionally tampers with evidence. He switches out his fingerprints on the murder weapon with the junkie’s boyfriend’s!

Oh Jack, you’re a man of the law. You’re straight-edged Ralph Lamb’s brother! You’re an example of honor to a corrupt city and you’re framing someone for murder to save your relationship with your mobster girlfriend! S!@T just got real.

Later, in bed with his beloved Mia that he just stomped on his moral compass for, she tells him he’s the only man he trusts. His heart is beating through his chest, he’s sweating buckets, but he still just can’t tell the truth.

This show is getting good.