The divas, drama and backstabbing are back for a second season! When Bombshell looks like a failure, the creators and cast are left to figure out what to do next — and break into song at random. 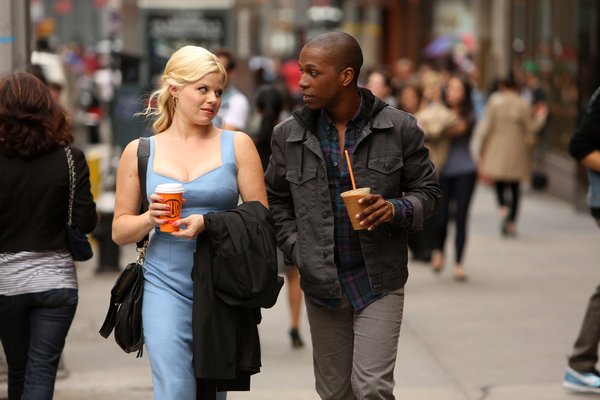 The wait has been too long, but Smash has finally returned for its second season, and it’s filled with more earth shattering ballads, catchy dance numbers, and drama than we all wished for. Although much has changed for our favorite struggling stars, the usual things remain the same.

The little show that could

For such a talented bunch, the cast and creators of Bombshell deal with an amazing amount of rejection. And it’s not just regular rejection. It’s a trying to find a seat at the cool table in the cafeteria, busting out your best joke, but everyone stares at you in silence and then you walk away, slip on a banana peel and a yogurt lands on your tear-filled face kind of rejection. With their hearts on the line, everyone believes Bombshell is about to be picked up on Broadway, until they get the devastating news that it won’t be and that all of New York is making fun of it.

It is Eileen’s (Anjelica Huston) determination and willingness to humiliate herself that keeps her beloved show alive. Despite cruel insults from Broadways’ bigwigs and horrible reviews, Eileen keeps throwing herself at the mercy of her critics. When it looks like there is no hope left for the show, she organizes an impromptu number in front of theater’s elite — and it works! Then, she completely throws away her pride and accepts financial backing from her ex-cheating husband, and suddenly the show still stands a chance.

The tale of two divas

Now that neither of them are playing Marilyn, Ivy and Karen are back to Square One. And this season the two have switched roles. Ivy, is slightly more humble and broken down, while Karen has mastered sticking her nose in the air and mean girl one-liners. Although she has every right to be pissed at Ivy for sleeping with her fiance, bitchiness just doesn’t look good on her.

Ivy has pretty much lost everything at this point. She was just suicidal five minutes ago, most of her friends on Bombshell have turned their backs on her, and she lost her sexy, powerful director boyfriend. To top it off, no one is hiring her and then she catches Derek kissing Karen. She has no idea who she is anymore and that brokenness makes her incredibly likable.

The next big thing

Karen, on the other hand, has a lot going for her. She’s now being treated like the star Derek always wanted her to be. People know her name and she has the ear of key players. Now, she’s working with Derek to find “the next big thing,” and she may have found it in Brooklyn. She stumbles on an amazing composer, Jimmy, and she and Derek hope to turn his music into the next Broadway sensation. He’s also going to be her new love interest and he’s way more charming and complicated than Dev.

Julia (Debra Messing) got torn to shreds in reviews of her music and then her husband kicked her out… again. Now she’s staying with Tom and is trying to recover from the deep humiliation. Also, Jennifer Hudson has entered the show as Broadway star Veronica Moore and she is fantastic. Her attention will undoubtedly be one of the things Ivy and Karen fight for this season. And Derek is finally being sued for sexual harassment from a number of dancers. Surprise. Surprise.