Spencer is on a hunt for the man who broke her heart; Aria settles for Ezra Jr.; Hanna forces Caleb to play nice with his family; and Emily resorts to therapy to calm her down, but it ends up riling her up. 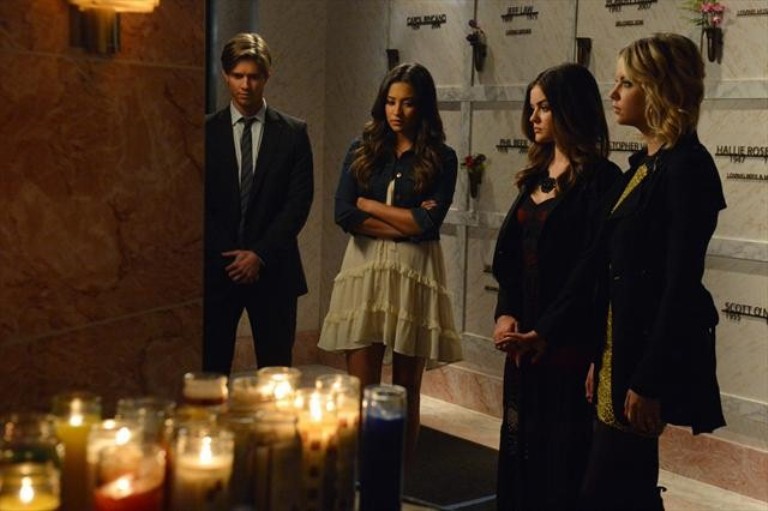 I lied. The PLL crew isn’t exactly dead to me. They were very lifeless in last night’s episode, and I found myself yawning a few times. If I could have found my remote, I may have changed the channel. But what the episode did do was leave some questions I actually care about finding out the answers to.

Spencer (Troian Bellisario) may as well be Anastasia Steele from Fifty Shades of Grey. Listen chick, why are you obsessed with getting “closure” when you know you are just prolonging the pain?! She paid her investigator a hefty price to continue researching Toby (Keegan Allen). The guy discussed how Toby had purchased flowers and left a leading statement for Spencer, saying people don’t buy flowers if they are trying to skip town. Well, Spencer got hustled. Although sleazy, the P.I. was direct in telling her to move on if at the end of this chase she doesn’t find what she wants.

What does she want?

To see a flower with a certain amount of petals, because apparently that’s her and Toby’s game to show their love to each other. Yeah, how about just writing “I love you” on a note? Or — even more ludicrous — telling the other person? I get that they had a secretive past, but at this point it seemed like a stretch. If Toby really cared about you, Spencer, he would beg for your forgiveness and just tell you he does.

Long story short: She finds absolutely nothing. Not to mention, she’s disconnected from her friends, and was ghostly pale. This ghost from Toby’s past needs to move on through the present and focus on her future.

While Ezra (Ian Harding) is off discovering himself, Aria (Lucy Hale) lies in his bed awaiting his return. When she hears rustling at the door, she runs over, hoping it’s him. It’s Wesley (Gregg Sulkin), who decides to stay at Ezra’s until he returns. Although gravely disappointed, Aria seems comforted by his presence. Why The Vampire Diaries reference? This is just screaming Elena-Damon-Stefan triangle to me. As viewers, I guess we just have to wait and see.

A call comes through on Ezra’s phone and the person hangs up abruptly when Wesley picks up. His reluctance combined with his lie claiming a “wrong number” had me thinking there was something more interesting going on. Nope. It wasn’t anything interesting —  and we find this out after he and Aria are out grabbing pizza. Wesley tried to hook up with his physics teacher, and her husband tried to confront him later when he and Aria were outside, so he smacks him in the head with whatever he was carrying.

Emily and Ali belong together

As we know, Emily (Shay Mitchell) had a thing for Ali. Now I am convinced they belong together because they have something important in common: Ali’s dead and Emily should be. OK, I am not serious, but it was a wretched episode to watch for Emily fans. All her emotions were dramatically forced.

Briefly, we witness a scene with Ali and Emily discussing a trip to Paris indefinitely. It’s really obvious that Ali either really liked Emily, or was very overtly leading her on. I wasn’t a fan of this flashback.

In the unanimously most poorly acted episode from Emily, she undergoes hypnosis to initially cope with her defensive murder, but ends up uncovering what she believes to be her killing Ali with the shovel. In the end, she apparently confused memories, and instead isolates the memories and realizes there was someone who watched her as she was attacked on the night she “passed out.”

The lurker wore a red hood (how predictable) and was a blonde, and Emily discussed these details with the rest of the PLL crew. She then theorized that she was the leader. The notion surfaced that could Ali be watching “Ali” as in was that really Ali who died/is buried?

Hanna (Ashley Benson) really threw on the soap opera flair last night and devoured poor Caleb with her aggression. She was persistent in pushing Caleb to make good with his family. I guess the writers for the show felt Caleb wasn’t getting enough action. In the most random turn of events, they end up at his aunt’s barn because she is moving away. His uncle is there and contorts his face into all sorts of longing, indicating that he has a burden on his chest. Hanna picks up on this and briefly discusses Caleb’s father with the uncle.

Later, Hanna unearths a photo the uncle gave to Caleb, and stretches the explanation by claiming she believes the “uncle” really is his dad, an assertion based on a ring in the picture and the folding of the photo (as though it was in a wallet, not in the barn).

Why is this disappointing? Because it’s the first plausible and realistic plot line the series has had since Hanna watched her parents almost get back together. A paternity plot? Not sure if this fits in the typical PLL schematic, but it may be a good change!

Where does this leave us?

What do you think viewers? Were you impressed or disappointed in this week’s episode as I was? What did you think of Spencer barging in on Ali’s umpteenth memorial service and telling Jason (Drew Van Acker) that Detective Wilden (Bryce Johnson) could be the father of Ali’s unborn baby?! (Yeah, I deliberately left this out in the recap because how many more of these can we have?)

Spencer has zero proof of paternity, but that doesn’t stop anyone on this show from outrageous claims, does it? Do you think the rest of the PLL crew will forgive Spencer for her outburst during a solemn occasion? And Caleb — what do you think is in store for him now? Who loved watching Dr. Sullivan (Annabeth Gish) indirectly called out Mona (Janel Parrish) on her shady gift, which clearly had a microphone in it. Is it just me or is Mona getting sloppy (she was very obvious!)?

Here’s hoping next week’s episode is better than this one! Check out the explosive promo below (“possessed” is a good color on Spencer, ha!).