NBC’s The Biggest Loser promoted this week’s episode as the biggest confrontation of the season! Well, guess who was smack in the middle of it? None other than me — Gina Harris McDonald. 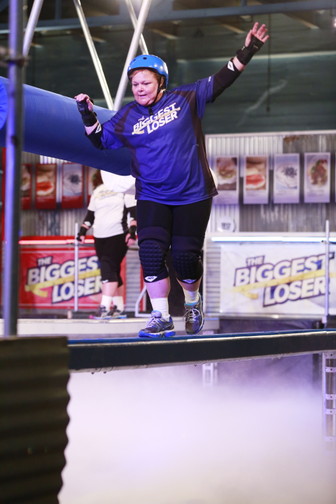 The premise of this week’s show is very simple: One roll of the die by each trainer will determine which player will “weigh in” for the entire team!

Did I want it to be me? Heck, no! I don’t think any of the contestants really wanted it to be them. Let’s just say Bob Harper was not happy with my attitude!

His questions escalated to the point of confrontation between the two of us.

Honestly, I don’t remember saying, “Every time I see your face, you rip my ass to shreds!” But apparently, I did.

I would say that this was the time when Bob really got through to me. It was very upsetting to be confronted and to have to finally face my issues, but in the end, it helped me let go of many things I’ve been holding on to for so long. Bob expressed how differently he sees me from how I see myself, and he encouraged me to “let it be me.”

Our talk set the stage for the entire week for me. As luck would have it, the premise of this week’s challenge was also to let the roll of the die determine which team member would compete to win letters from home. After succumbing to Bob’s talk, ironically, I was the chosen one. My attitude changed from fear to determination, and I was so excited to do this challenge. What an awesome opportunity to attempt things that I would never even imagine before The Biggest Loser.

The challenge was hard, yet so much fun! It was certainly a time in my life when the ability to laugh at myself came in handy. In the end, Danni won the challenge, but I felt like I had won so much more! I stepped out of my box and took a chance to do something different, and I did it with determination and joy! Yes, joy!

Check back next week for more blogs from Gina!

More about The Biggest Loser