What sent Charlie Sheen on his infamous #winning meltdown? While many have long suspected it was drink, drugs or some combination, he believes it was a hormone cream. Is Tiger Blood really testosterone? 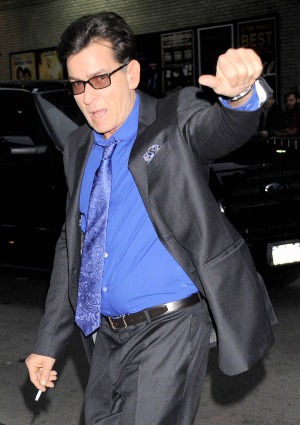 Charlie Sheen has attempted to do the near impossible: Explain his epic headline-grabbing 2011 meltdown to any sane person.

Trying to grasp what the actor was thinking during his #winning rampage, Katie Couric sat down with the 47-year-old for an interview on her talk show.

Did the ghost of Get-Your-Sh**-Together visit Charlie Sheen or what? >>

“I think I just started partying too hard,” a very calm Charlie Sheen explained when the host asked what in the world happened to him. “But I wasn’t partying on the set [of Two and a Half Men]. I was never high when I worked.”

“I think I was doing too much testosterone cream, and I think it metabolized into… a steroid,” he shared when asked if he was under the influence of anything at the time.

“I think it was a bit of a roid rage. That’s the only thing I can point to to explain [it]. There was no booze, no pain pills — seriously there was nothing, there was no street drugs.”

One person who deserves a round of applause for helping Charlie Sheen through that bizarre period? His father, Martin Sheen.

“He was very supportive,” Charlie explained to Katie Couric. “He didn’t know who he was talking to. He wasn’t talking to the real guy — he was talking to some version of me. So he backed off, and then when it all slowed down and came to a stop, he said, ‘Let me give you advice: Get back to who you know you are, go get your money from the studio and take care of your kids.’ That was great advice. I did all three.”

Watch below as Charlie Sheen explains his period of “roid rage” to Katie Couric:

What do you think of Charlie Sheen’s testosterone cream explanation?