On Tuesday, it was announced that last year’s acting-category winners will return to present at the 85th Annual Academy Awards. Meryl Streep, Jean Dujardin, Christopher Plummer and Octavia Spencer will all be in attendance. 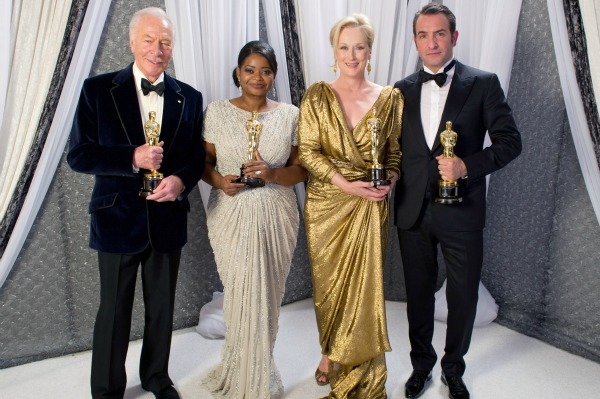 It is a long-standing tradition at the Academy Awards for one year’s acting-category winners to return as presenters the following year. On Tuesday, it was announced that the tradition will continue in 2013, as winners Meryl Streep, Jean Dujardin, Octavia Spencer and Christopher Plummer will all attend the 85th Annual Academy Awards.

In a statement today, show producers Neil Meron and Craig Zadan said, “We are honored to have Meryl, Octavia, Christopher and Jean, last year’s Oscar winners in each of the acting categories, return to the Oscar stage.”

Usually, the Best Actress winner announces the winner of the Best Actor category, and vice versa. This same idea will be applied to the supporting actor categories as well.

Last year, Streep was honored for her portrayal of Margaret Thatcher in The Iron Lady. She has two other Academy Awards on her shelf for her work in Kramer vs. Kramer and Sophie’s Choice. She is the most nominated actor in Academy history, with 17 nominations in total.

It was also announced last week that Mark Wahlberg and the foulmouthed teddy bear, Ted, will be presenting. Ted is voiced by Academy Awards host Seth MacFarlane, who also wrote and directed the film Ted.

With only three weeks left until Hollywood’s biggest night, the awards show stands to be one of the most anticipated in recent years, not only due to a great crop of films in 2012 but also because of the number of A-list celebrities expected to attend.