On Monday, Channing Tatum paid a visit to Late Night with Jimmy Fallon to promote his new movie, Side Effects, and play “Sticky Balls.” 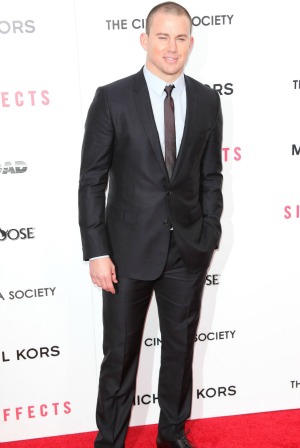 On Late Night with Jimmy Fallon on Monday, it was all about balls with his guest Channing Tatum. Tatum, who was on the show promoting his latest film Side Effects, joined the talk-show host for a silly game involving balls that stick.

The men were dressed in suits made of a Velcro-like material to get those red balls to adhere to the surface. Tatum had on a big yellow jumpsuit, while Fallon donned a blue jumpsuit.

The game got really interesting when the late-night funnyman was explaining the rules about counting the final score; he said, “I’ll handle your balls, you handle my balls.”

From then on, there was a lot of sophomoric humor going on about the balls and the fact that they stick.

Once the game began, it was clear who was the athlete and who was the comedian. Tatum deftly handled the red balls as they sailed into the air and stuck on Fallon’s jumpsuit. Fallon tried to keep up, but the Magic Mike star was too much for him.

The final score revealed that the father-to-be managed to get 15 sticky balls on Fallon, while the comedian came up just shy of that score.

Fallon often repeats successful games on his show with other celebrity guests, so let’s hope “Sticky Balls” comes back. Balls are just funny.