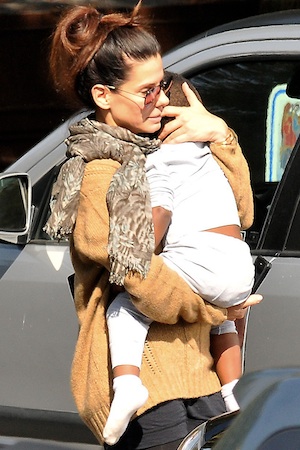 So cute! Sandra Bullock and son Louis Bardo cheered on the Baltimore Ravens in the Super Bowl Sunday night in New Orleans, Louisiana, decked out in Ravens jerseys. Bullock spent the game with the Tuohys — whose adoptive son Michael Oher is a Baltimore Raven — and whose life story inspired Bullock’s major blockbuster, The Blind Side.

Leigh Anne Tuohy — who Sandra Bullock portrayed in The Blind Side — spoke with People magazine about spending the Super Bowl with Sandra and her son. “The 3-year-old had the lucky No. 3 jersey on! He wore it all through the playoffs!” Photos of Bullock and her son Louis at the game show he was proudly wearing a miniature version of Michael Oher’s NFL jersey, number 74.

Leigh Ann also told People Bullock’s son might not be a football fan, at least not right now. “I think Louis was a little more interested in the little lights that would go on your finger [that were passed out in the stands] verses[sic] the game, but that is OK.”

Mrs. Tuohy also explained both her and Bullock took major steps to avoid overshadowing the players by not being photographed together. “It wasn’t about us. Sandy and I knew that,” said Leigh Ann. “It was about celebrating a young man who worked tremendously hard for the last 11 years to overcome every kind of adverse situation and [Sunday] he achieved his dream. We’re still giddy. We really are.”

In 2009, Sandra Bullock won an Academy Award for her portrayal of Leigh Ann Tuohy in The Blind Side.

37 mins ago
by Alyssa K. Davis