The couple head off to the royal playground of Mustique to enjoy their last baby-free months before the onslaught of royal midnight feedings. 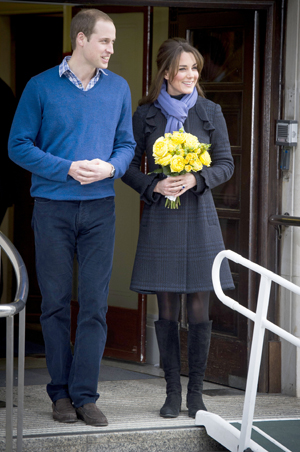 Two months ago, Duchess of Cambridge Kate Middleton was sick enough to be hospitalized with hyperemesis gravidarum, but she must be feeling better: She and Prince William flew to the Caribbean island of Mustique for a babymoon, reports the Sun.

The Daily Beast‘s Royalist blog reports that the trip “involves an eight-hour flight followed by a hop in a sick-making light aircraft.”

My, that is a lot of plane travel for a pregnant woman — even one in the second trimester, well-known to be the easiest for most: before she’s large and ungainly and after she’s done being sick.

But the Mustique trip is a tradition for Kate and William as well as the royal family. The Royalist writes, “This is Will and Kate’s seventh trip to Mustique together.”

Princess Margaret built a house there in the 1960s, and the “wild parties on Mustique, also home to Margaret’s photographer cousin, Lord Lichfield, were the stuff of legend,” the Daily Mail reported in 2007.

Mustique became a society destination, with jet-setters like Bianca and Mick Jagger dropping by to party in utter privacy.

So in short, there will be no topless pictures of Kate snapped on Mustique. Oh, no no no.

In fact, as was widely reported last year when Kate and William vacationed on Mustique, the island’s residents and visitors will likely be restricted from zipping around on the “mules,” golf carts customarily used on the island to get around. Instead, they’ll have to ride in taxis to ensure no one gets dropped off where the Middletons and royal couple are holed up, a practice that has irritated some in the past.

The trip itself might not go down well in the UK, either.

“It is doubtful how well the taking of an exclusive holiday by the young royals will play in a particularly cold and depressing British winter, so soon after the public were being told that Kate was so ill with morning sickness (Sorry! Hyperemesis gravidarum!) that she could scarcely be expected to attend any more public events or perform public duties for the months ahead,” said The Royalist’s Tom Sykes dryly.