More followers are set loose to kill Hardy, Jordy snitches, and the truth comes out about the “gay neighbors.” 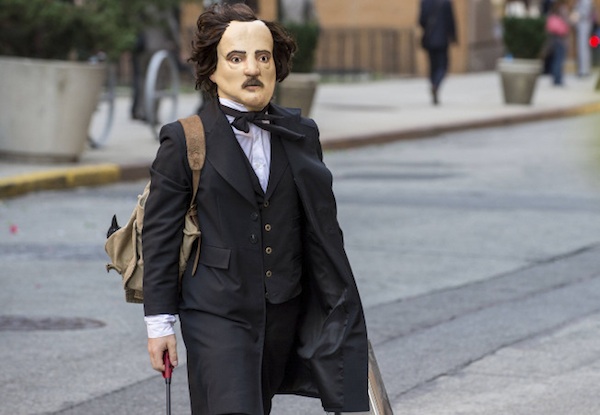 This week’s The Following was not nearly as cringeworthy or shocking as previous episodes. Instead, it focused more on the intricacies of Carroll’s (James Purefoy) followers. However, there weren’t many surprises in that department either. If you’ve been watching, then you saw a lot of this coming.

This week we met another one of Carroll’s followers, Rick, who is set loose to kill for the first time (he’s the guy dressed as Edgar Allan Poe who set a man on fire last week). His character is supposed to be enacting revenge against the three men responsible for destroying Carroll. The guy he set on fire was a book critic who gave Carroll’s novel a horrible review. Next, he moves on to the man who denied Carroll tenure at the university and stabs him to death. And, of course, Ryan Hardy (Kevin Bacon) is supposed to be the third victim.

Rick isn’t able to finish his murdering to-do list before Hardy figures out that he and his wife, Maggie, are in this together. Maggie kills FBI Agent Riley who we knew little about, except that he was handsome and divorced. Rick and Maggie then attack Hardy, but he’s prepared and puts two bullets in Rick. Maggie gets away and now she’s free to follow through on orders and torment Hardy next week.

Jordy’s heart breaks when he discovers Carroll was using him and wanted him to die. He winds up giving up information to the FBI, but feels so overwhelmingly guilty for betraying his leader that he kills himself. Handcuffed to a hospital bed and out of better options, he swallows the gauze that’s wrapped around his arm until he chokes to death. Bad way to go.

Paul (Adan Canto) really does seem to be in love with Will (Nico Tortorella) and the two played gay chicken even when no one was looking, so that’s why Paul hates Emma (Valerie Curry) so much. Tired of being the third wheel, Paul kidnaps a gas station attendant and tells Will and Emma he wants to keep her. Will says no, but for now they can put her in the basement. That means she’ll probably be on the chopping block next week.

And for the first time we see Will do something seriously screwed up. He takes little kidnapped Joey outside and teaches him how to kill bugs and small animals so he can watch their souls go to heaven and give his own life more meaning. Joey hesitates and says he’s never killed anything before, but he still screws the lid on that container to suffocate the cute little mouse. You gotta find that kid, Hardy, before he becomes just another follower.

33 mins ago
by Alyssa K. Davis