She loves Brick… and probably lamp, too. 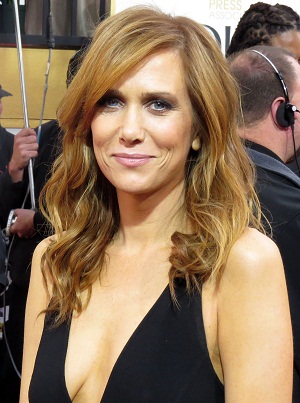 Anchorman and Anchorman 2 director Adam McKay confirmed via his Twitter account that Saturday Night Live regular and Bridesmaids star, Kristen Wiig will be joining the cast of Anchorman 2!

Veronica Corningstone Christina Applegate even got in on McKay’s celebration by replying with, “woohoo! That’s so great.” Later, she tweeted, “So excited Kristen Wiig has joined our cast for anchorman2. Going 2 b best movie ever made. Besides the best movies ever made.”

Kristen will join Applegate, along with the rest of the already stellar cast, which includes Will Ferrell, Steve Carell, Paul Rudd and Dave Koechner.

According to MTV, Wiig might be playing the love interest for Carell’s character, Brick Tamland. During the voiceover on Anchorman, we’re told, “Brick Tamland is married with 11 children and is one of the top political advisers to the Bush White House.” Will Wiig be the mother of those children? Or will the next movie come before all that?

The original Anchorman was released in July 2004. It will be a little more than nine years when the new one releases on Dec. 20, 2013. At this rate, the movie may need to feature them when they’re all old, wrinkled and gray, and Anchorman 2 will have to take place inside a nursing home where the guys all live. Ron will suffer from Alzheimer’s disease and still think he’s on the news every night. Everyone else will jump in to give a fake broadcast to appease their fearless trusty senile leader.

Paul Rudd ready for Anchorman 2, explains big hair
Anchorman 2 gets a release date and a possible new co-star
This just in: Ron Burgundy hearts The Dictator