We love a guy with a good sense of humor and Gov. Chris Christie is exactly that. 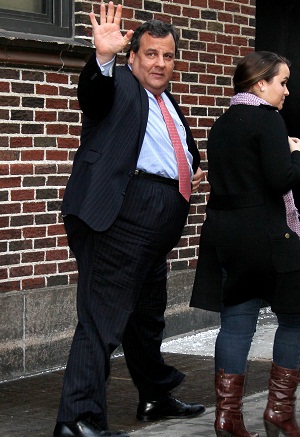 Last night, New Jersey Gov. Chris Christie showed up on the Late Show with David Letterman, and it was all fun and games. Not only did he take Letterman’s teasing like a champ, he joined in. Gov. Christie even read off some of his all-time favorite jokes David Letterman made about him.

It turns out pretty girls aren’t the only people who can render Letterman speechless. Later, when the late-night host tried to get down to business, Gov. Christie pulled a pastry from his suit pocket. The only thing Letterman could do was offer him a tissue to use as a napkin.

Last year, Barbara Walters named Gov. Christie one of her most fascinating people of 2012. While it seemed mostly like she did it to poke fun at him, he took her in stride as well.

We know Babs thinks Gov. Christie is “too fat to be president.” But we think if he ever ran and was voted in, he’d be a pretty good guy to have on our team.

He may allow heat for his weight, but he can still toughen up and show off his power when he needs to. Remember the last time a hurricane was about to hit New Jersey? He sure put his people in their place!

Everyone knows Americans like their presidents to be a little sassy while laying down the law. There’s nothing stuck up or above-it-all about Gov. Christie… He’s Jersey through and through. That’s why we think he is so interesting… and also why we know if he ever becomes president, we’ll certainly be entertained.

If you want to hear some truly rude commentary on last night’s joking, watch what ABC News had to say before the clips…

That was kind of a jerky thing to say! Since when did being on the news give you the right to be mean?

What do you think? Was Gov. Christie funny on Letterman? Did ABC News go too far? (Is it their job to be funny?)