The celebrities were partying it up all weekend in New Orleans in honor of Super Bowl XLVII. Check out the hot event hosted by Michael Strahan and Erin Andrews. 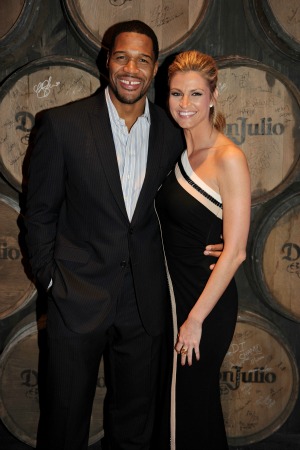 While many of us were prepping snacks and decor for our simple Super Bowl parties, the celebrities were partying it up all weekend long in New Orleans. On Saturday night, Live with Kelly & Michael host Michael Strahan and FOX Sports reporter Erin Andrews hosted a swanky affair for Tequila Don Julio.

The event was held at the Audi Forum, where invited guests and friends joined the TV personalities for an evening celebrating football with cocktails and a three-course meal. Former NFL star Strahan even had his own signature cocktail called “The Stra” concocted with tequila, 7UP and pineapple juice.

The night was filled with familiar faces, from Modern Family‘s Sofia Vergara enjoying the cocktails with friends to Hollywood hotties Chace Crawford and The Hunger Games‘ Josh Hutcherson holding court in the VIP lounge. In fact, it was Hutcherson who hit the dance floor in his trucker hat and jeans to show off his moves.

A majority of the room, including hosts Strahan and Andrews, were reportedly rooting for the San Francisco 49ers. Even though the Baltimore Ravens came out on top, however, we doubt it diminished anyone’s New Orleans spirit and their love of a good party.

Read more on the Super Bowl