Lindsay Lohan is constantly in a world of trouble — but is it really all her own fault? Mom says no, and before you laugh, you might want to hear her out. 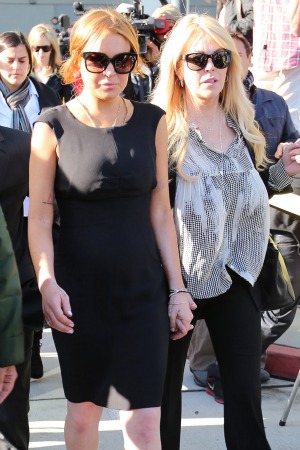 The public has long seen Lindsay Lohan as a lost cause and her mom as her enabler, but in a new interview, Dina Lohan touches on some truths that actually make sense. The short version: Lindsay’s problems might not be entirely her own fault.

Dina sat down for an exclusive interview with Mario Lopez and Extra to talk about her upcoming book, A Parent Trapped, and explained that, although Lindsay has chosen her own path, the people and situations around her have often been toxic.

“A little bit of both,” Dina admitted. “I really think she’s a target, and since I am a single parent, I think they think there’s a weaker link that she doesn’t have as much protection around her.”

She has a point. While there comes a time when you have to grow up and take responsibility for your own actions, stars like Lindsay are surrounded by leeches every day, and she certainly has not had the greatest family life.

Calling herself “a victim of domestic violence,” Dina explained, “I don’t really want to speak about that on camera, but I’ve been a single mom my whole life. I’ve had sole custody, and my other three have had no relationship with [Lindsay’s dad, Michael Lohan].”

This isn’t the first time Dina has faulted the past for Lindsay’s troubled present. In January, she told the New York Daily News, “Lindsay saw her dad abuse me — that’s why she’s so screwed up,” and went on to describe the physical and sexual terror she claims to have suffered at the hands of her ex.

It’s no secret that people with troubled childhoods often grow up to be troubled adults. Is that a valid excuse for this starlet who’s been under the microscope since before she hit puberty? The pressures of family, fame and career would be enough to make even the happiest, most well-adjusted kid crack. Would giving her the benefit of the doubt every once in a while be equal to enabling her?

Regardless, Dina says Lindsay is in a better place lately. She is back in New York — “She’s safer at home,” Dina says — and possibly enjoying a fledgling relationship with Max George. However, Dina coyly avoided a direct answer when Lopez flat out asked if he and Linds are dating.

“I can’t go there — that’s personal — but yes he’s lovely,” she said. “They are very good friends. He’s a sweetheart.”