Ever wonder which of the Kardashian sister talks the most trash? Khloé Kardashian recently weighed in on the fine line between having a feisty tongue and being a hater.

Related story Khloé Kardashian Reveals Tristan Thompson Proposed to Her, But She Said No For This Highly Respectable Reason 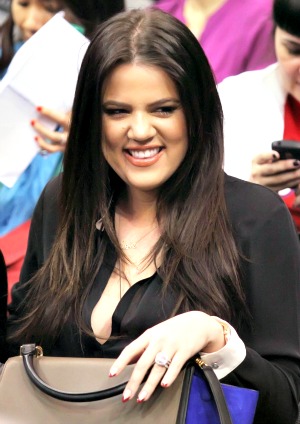 Khloé Kardashian‘s been around the celebrity block long enough to have been tangled up in a bit of trash-talking, but is she guilty of throwing shade?

“I am a pretty good s**t-talker, but I don’t think I am a hater. I am just a realist, so I don’t know if that’s shade,” the wife of Lamar Odom, seen here showing off her sparkling ring at one of his games, said when asked if she ever cops an attitude with her famous sisters.

“But I am a pretty good… like I will just be like what the f**k are you guys doing. But it’s not… it’s more like s**t-talking and bantering back and forth.”

Though they’ve feuded here and there, the 28-year-old insists she, Kourtney and Kim Kardashian always have one another’s best interests at heart.

“None of us… none of us are malicious but also don’t block each other’s blessings,” Khloé explained during a visit with Swagger New York.

“If anything, for example, like my sisters the first week of X Factor were like ‘You can do this.’ They were like so supportive and uplifting, and they could have been like yeah… you shouldn’t… If they wanted to, they could have, but we aren’t like that. And that’s what’s phenomenal. So I don’t know if we really block shade. I think it’s more like sisterly criticism and back and forth.”

Check out the video below for more on how Khloé Kardashian has learned to fight her weight critics!