On Monday, over 160 nominees gathered in the Beverly Hilton ballroom to celebrate their nominations and each other in preparation for the 85th Annual Academy Awards. 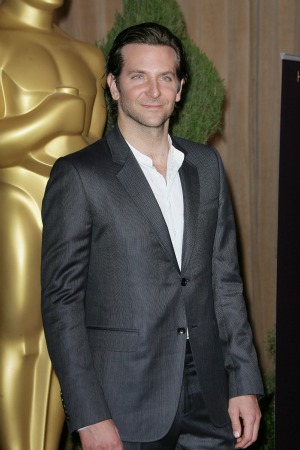 On Monday in Beverly Hills, more than 160 nominees gathered in the Beverly Hilton ballroom for the last big event of the awards season before Oscars night. The annual Nominees Luncheon is an opportunity for all of the honorees to meet each other over a breezy meal in Los Angeles.

Each nominee is given a certificate recognizing his or her achievement in film and a coveted Academy Awards sweatshirt as a souvenir of their year. They also participate in the “class photo,” which captures all of the nominees in attendance for one historic moment. The nominees won’t all be in one room together again until Oscar night.

This year, the actors brought a lot of laughs and memorable quotes that made the media in interview room swoon and cheer for their favorite celebrities. SheKnows was there, and we have the inside scoop.

The first big celebrity to wake up the press in the room was the man of the awards season, Ben Affleck. Coming off of his DGA Awards win over the weekend, he entered to applause. When asked about the elephant in the room, no Best Director nod, Affleck took the whole snub in stride.

He said, “We got seven nominations, including Best Picture. I’m elated by that. I’ve had many, many years watching from home.”

If the Argo director thinks he’s going to win Best Picture, he doesn’t seem overly confident. He said he’s leaving any calculations to the “Oscarologists,” who also want an increased number of Best Director nominees to match the number of Best Picture nominees.

From there, the room moved at a swift pace as nominee after nominee came in to greet the press and give their impressions of the awards season. Many of the ladies were asked about their dress choices for the big day, but it was Jessica Chastain of Zero Dark Thirty who gave the best answer. 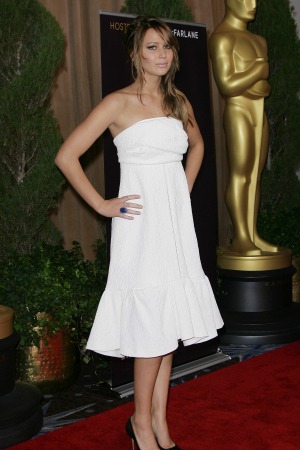 Jennifer Lawrence from Silver Linings Playbook said she might wear “sweatpants” but will probably “suck it up and wear a corset.”

Although Anne Hathaway has had “no preparation” for her red-carpet gown yet, she mentioned that she enjoyed Sunday’s Super Bowl and the “fried food” that goes along with the big sports day.

If you thought Hugh Jackman was going to cause the most swoon-worthy moment of the day, think again. It was Bradley Cooper who caused the ladies to squeal with delight when his name was announced and he walked into the room.

When asked if his role in Silver Linings Playbook was a career game changer for him, Cooper wittily replied, “I know that I wasn’t here for The Hangover.”

Also charming the room was 9-year-old Quvenzhané Wallis, nominated for Beasts of the Southern Wild, who brought her beloved puppy purse that has accompanied her to all of the red-carpet events this busy season.

The showstopper wound up being The Master nominee Amy Adams, who walked in with the quote of the day: “Sorry, you just interrupted my flirting with Bradley Cooper and Christoph Waltz.”

She kept getting cut off by the hotel’s intercom music and the announcer letting everyone know that the luncheon was about to begin. Adams kept the media in stitches while she plowed through each interrupted question.

Finally, three cheers for Best Supporting Actress nominees Sally Field and Jacki Weaver for proving that there are good roles for women over age 40. They looked great, and both proved that their acting chops are still as sharp now that they’re in their 60s as in their younger years. Weaver even revealed her age to the media, which was refreshingly honest. You would never know she was 65 years old, and frankly, it just shouldn’t matter.

The nominees were then shuttled into the ballroom to enjoy the rest of the festivities and celebrate the fact that it really is great to be nominated.

If you don’t believe us, believe Robert De Niro who revealed, “It’s still a big deal.”