Justin Timberlake totally called out Britney Spears during his first live show in five years this weekend — at least, that’s sure what it sounded like. 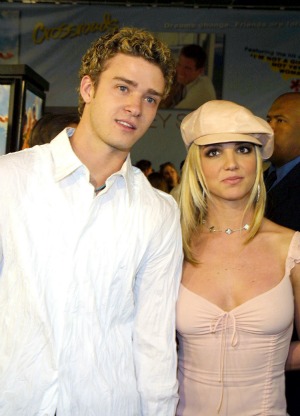 It was one of the greatest burns in breakup history: Justin Timberlake slammed his ex Britney Spears with his hit “Cry Me a River” (complete with Brit Brit lookalike in the video) after he dumped her for allegedly cheating with choreographer Wade Robson.

The star dusted off his 2002 hit last weekend for his first live performance in five years, but it was his commentary that got tongues wagging.

Why David Bowie is classier than Justin Timberlake >>

“Sometimes in life, you think you found the one,” Timberlake said before breaking into song. “But then one day you find out that she is just some b****.”

Oh snap! Was that a Britney burn? Not so fast, he says.

Timberlake is simply shocked and appalled that we would think he’d bash his ex (not like he didn’t write a song totally calling her out or anything).

He addressed the growing controversy on Twitter, writing, “Ok. I see you. Wouldn’t disrespect ANYONE personally. Ever. #Relax #ItsBritneyB**** I do love that saying though*with accent* #Respect.”

After playing coy about it for years, the singer finally admitted he wrote the song about his ex in an E! True Hollywood Story episode about Timbaland.

“I was on a phone call that was not the most enjoyable phone call,” he explained. “I walked into the studio and he [Timbaland] could tell I was visibly angry.”

Britney may or may not be oblivious to the so-called diss that’s making us long for millennium-era TRL, but if she knows about it, she’s taking the high road. All she tweeted today was a made-up convo between her and her dog.

“I don’t think so honey #VivaLasVegas 🙂 RT @hannahspears Mommy, are dogs allowed to gamble in vegas? Gonna cash all my bones in for chips.”